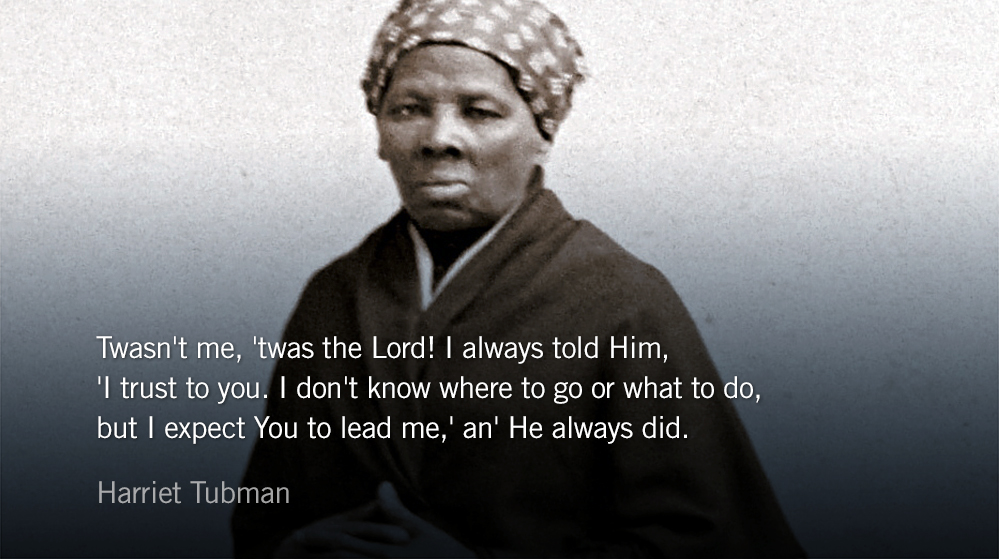 “I always told God, ‘I’m going to hold steady on you, and you’ve got to see me through,’” Harriet Tubman said near the end of her life. Known as “Moses” to the slaves she lead to freedom along the Underground Railroad, Tubman was herself a former slave whose life radiated in faith, hope, and service to others.

In her well researched series, People of Faith, author Rebecca Price Janney chronicles the risks and sacrifices Tubman endured as she leveraged her freedom for others. Reflecting on her first moments after crossing the border into a free state, Tubman said:

I looked at my hands to see if I was the same person, now that I was free. There was such a glory over everything. The sun came up like gold through the trees and over the fields, and I felt like I was in Heaven.

But to this solemn resolution I came; I was free, and they should be free also; I would make a home for them in the North, and the Lord helping me, I would bring them all there. Oh, how I prayed then, lying all alone on the cold, damp ground; “Oh, dear Lord,” I said, “I ain’t got no friend but you. Come to my help, Lord, for I’m in trouble!”

“Let not your hearts be troubled,” Jesus instructed his followers. “Believe in God; believe also in me.” Seeing a command like this fulfilled in the life and work of Harriet Tubman is challenging for all believers—something people who knew Tubman then, and study her now, have all noted. A profile in Christianity Today records:

Tubman said she would listen carefully to the voice of God as she led slaves north, and she would only go where she felt God was leading her. Fellow abolitionist Thomas Garrett said of her, “I never met any person of any color who had more confidence in the voice of God.”

This week Secretary of the Treasury Jacob J. Lew announced that “for the first time in more than a century, the front of our currency will feature the portrait of a woman — Harriet Tubman on the $20 note.” Tubman is among multiple Christian figures to be added to US currency in the next four years.

In our celebration of the great people of faith who walked before us we must be drawn to the one from whom they drew all their strength and to whom they poured out all their praise. “Twasn’t me,” Tubman declared, “’twas the Lord! I always told Him, ‘I trust to you. I don’t know where to go or what to do, but I expect You to lead me,’ and He always did.”