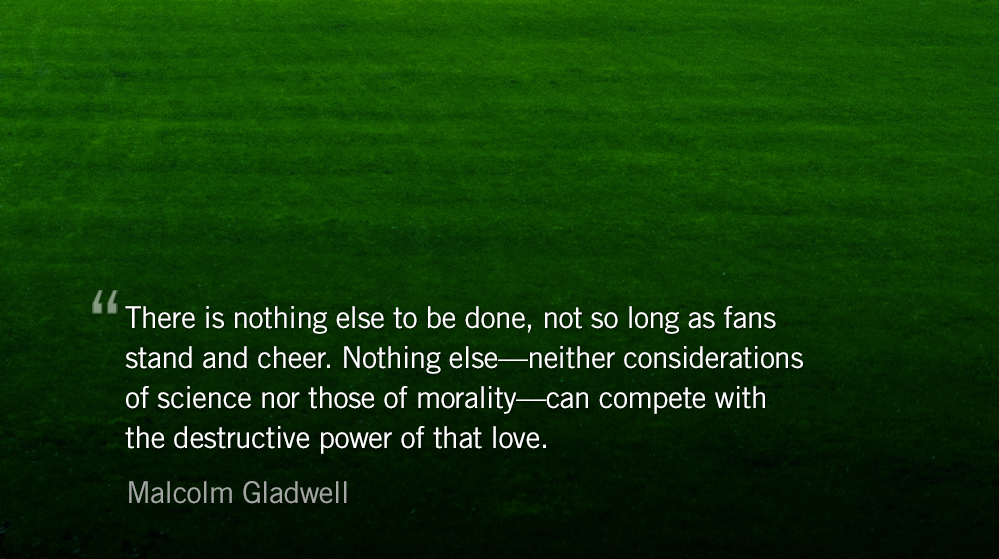 Hard Hits: Faith and the NFL :: The Weekend Reading List

“I remember, every season, multiple occasions where I’d hit someone so hard that my eyes went cross-eyed, and they wouldn’t come uncrossed for a full series of plays.” — Kyle Turley, former offensive tackle for the Saints, Rams, and Chiefs

The NFL, Malcolm Gladwell says, “is a moral abomination… Can you point to another industry in America which, in the course of doing business, maims a third of its employees?” Gladwell compares the NFL to dogfighting where an owner, “willingly submitted his dog to a contest that culminated in her suffering and destruction. And why? For the entertainment of an audience and the chance of a payday.”

“[Pro] Football is one of the most dehumanizing experiences a person can face.” — Dave Meggyesy, former linebacker, Cardinals (1963-69)

“Dehumanizing sounds so extreme, but when you’re fighting for a football at the bottom of the pile, it is kind of dehumanizing. It’s like a spectacle of violence, for entertainment… It’s make-believe, really. That’s the truth about it.” — Chris Borland, former linebacker for the 49ers

“Part of what makes dogfighting so repulsive is the understanding that violence and injury cannot be removed from the sport,” says Gladwell. “It’s a feature of the sport that dogs almost always get hurt.”
Think Progress notes that chronic traumatic encephalopathy (CTE), a disease which manifests in symptoms similar to Alzheimers, is the smoking gun of the NFL’s methodical destruction of its athletes lives. “Dr. David Geier of The Post and Courier reports that evidence of CTE — which has been linked to depression, suicide, and memory loss — has been found in the brains of 87 out of the 91 dead NFL players who were examined by the Center for the Study of Traumatic Encephalopathy.”
The latest research on traumatic brain injuries shows the greatest damage to an athlete’s brain tissue — and future — comes from the “normal” hits, not the colossal ones. Sub-concussive hits, impacts which do not cause a concussion, occur up to 1,000x per season for an individual linebacker, adding up in the tens of thousands over a career that starts in high school.
This is a story the NFL has worked aggressively to suppress, including forcing Sony Pictures to take “most of the bite” out of an upcoming movie “for legal reasons.”

In the short term, players (even young ones) become addicted to prescription drugs and marijuana to manage their physical pain; and in the long-term they experience degenerative neurological disease at disproportionately high rates.

Many fans expect new technologies like instantaneous impact data and improved helmet design to help athletes stay in the game longer. Yet there are two problems which make this unlikely. First, sub-concussive hits occur in practice, even in the comparatively less violent “shells” practice where players only wear helmets and shoulder pads. More importantly the NFL’s most aggressive investments in technology are not to improve player safety, but to increase fan engagement and revenue.

This year the league is investing in RFID chips which will sit under both shoulder pads of every player in the league, as well as on the officials, yard markers, and pylons. CIO magazine reports that “The NFL plans to use the data generated to power the NFL 2015 app for Xbox One and Windows 10, allowing for things like ‘Next Gen Replay’ that will allow fans to call up stats for each player tied into highlight clips posted on the app.”
Some Christian communities’ obsession with the NFL is a living confession that we are as of-the-world as we are in it. The fallen reality of the game should dramatically reorient our posture toward the NFL. Christian communities could start by discussing how to rightly engage with the NFL — and how much time and energy is appropriate to dedicate to spectator sports in general.

There is nothing else to be done, not so long as fans stand and cheer. We are in love with football players, with their courage and grit, and nothing else—neither considerations of science nor those of morality—can compete with the destructive power of that love. — Malcolm Gladwell

If Christians’ interactions with professional sports are no different than someone outside the church there is simply no testimony to be seen. Faith reorients our understanding of human dignity, fortifies our desires for justice, and releases us from the clutches of media overindulgence. We should lend our voices to reforming sports in every way we can — knowing that our loudest votes for or against the current state of the NFL come through our money and time.