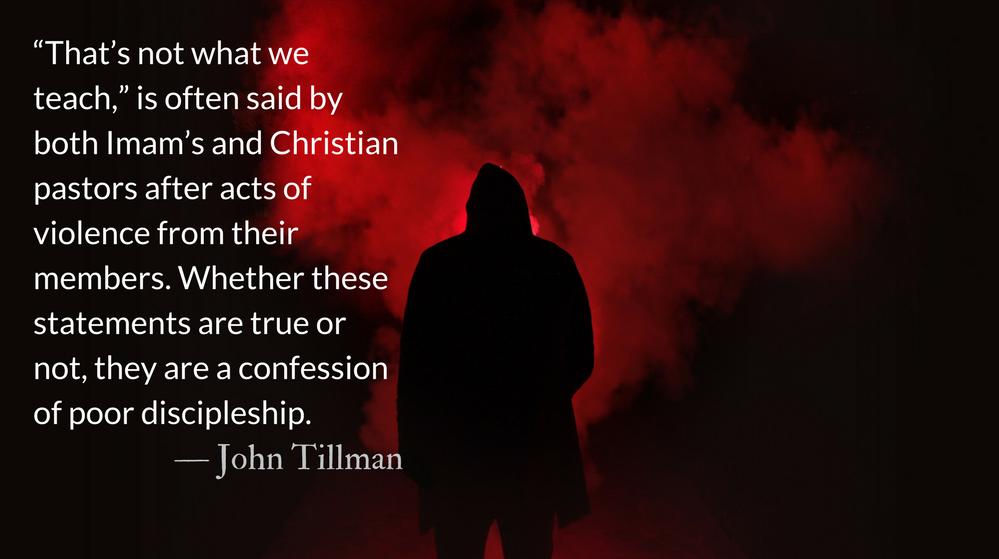 Extremism as a Discipleship Problem

Scripture: 1 Thessalonians 4.6
You became imitators of us and of the Lord, for you welcomed the message in the midst of severe suffering with the joy given by the Holy Spirit.

Reflection: Extremism as a Discipleship Problem
By John Tillman

Audiences have long been fascinated with extremism and the process of radicalization. This month a TV series will premiere retelling events surrounding the 1993 raid that killed David Koresh and the Branch Davidians, reminding us that radicalization is not merely a third-world or a Muslim problem.

Radicalization has been imagined in fiction as psychological manipulation, as brainwashing, as bribery, and has even been sympathetically redressed as the rational actions of those with legitimate grievances. But the radicalization of persons in any religion or belief system often comes down to an education problem. Christians would call it a discipleship problem.

Islamist terrorists such as, Sayfullo Saipov, who carried out a truck attack in Manhattan, are often motivated by a faith that in the end is little more than a political and ethnic identity.

“That’s not what we teach,” is often said by both Imam’s and Christian pastors after acts of violence from their members. Whether these statements are true or not, they are a confession of poor discipleship which has far wider ranging effects than the infinitesimal percentage of Christians (or Muslims) who resort to violent attacks.

Poor discipleship in Western faith is allowing Christianity to become little more than a political distinction and in some cases, a racial one. Our brand of moralism is a hair’s breadth off from the Pharisees of the New Testament. Like the Pharisees, we are not above using our moralistic interpretations of scripture to justify denying assistance to the needy. We are not ashamed to make embarrassing political alliances to ensure that we don’t lose our place of cultural influence.

We can find hope, however, in today’s readings in Acts. Though the Bereans are called “more noble” than the Thessalonians, it is the Thessalonian church that is more well known to us through the letters Paul writes to them. First Thessalonians is a joyful celebration of those who were left in a difficult situation, without Paul who introduced them to Christianity. (And without Google.) Yet through diligence, faith, and the guidance of the Holy Spirit, persevered and blossomed in faith.

Even in a culture dominated by a brutal empire, those willing to devote themselves to prayer, Bible reading, and connecting to the Holy Spirit, can not only survive our culture but continue the process of transforming it one life at a time.

The Call to Prayer
Taste and see that the Lord is good; happy are they who trust in him! — Psalm 34.8