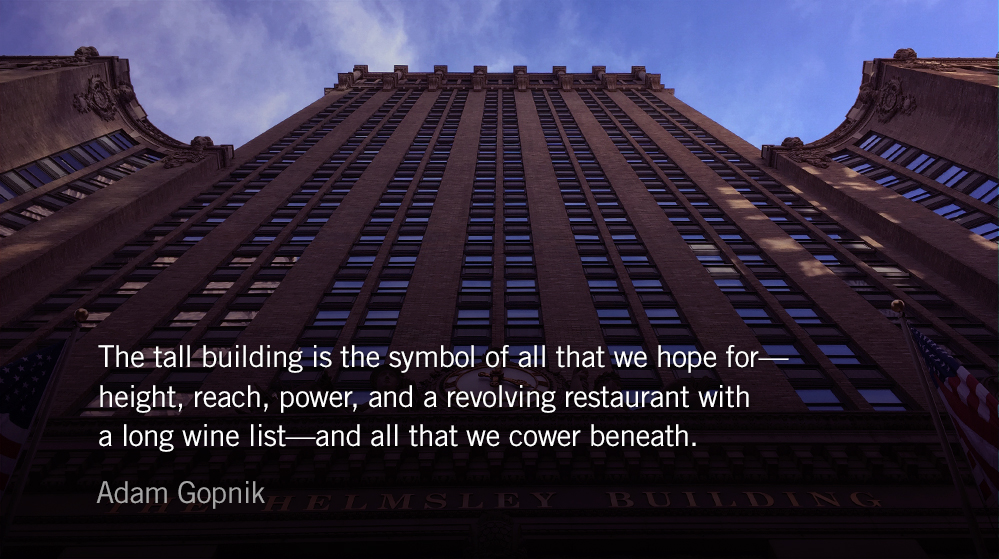 Effortlessly Holding it All

For the LORD is a great God, and a great King above all gods. In his hand are the depths of the earth; the heights of the mountains are his also. — Psalm 95:3-4

It may be partially as survival mechanism, but urbanites find near-perverse delight in the idiosyncrasies of city life. One of the most striking contrasts in New York City is found in a 7-ton bronze statue of the god Atlas. Although immense, and depicted with defined muscle, the figure of Atlas strains under the weight of the world, which rests on his shoulders.

The 45 foot tall statue is dwarfed by the scale of Rockefeller Center rising above it. “Heroic materialism,” Adam Gopnik observes, quoting British author Kenneth Clark on modern commercial culture as demonstrated in its architecture.

‘Why are the public buildings so high?’ another Englishman of the same Oxonian generation, W.H. Auden, who knew the squalid city rather better than Clark did, asked when he arrived. ‘Why, that’s because the spirits of the public are so low.’

Gopnik continues, “The tall building is the symbol of all that we hope for—height, reach, power, and a revolving restaurant with a long wine list—and all that we cower beneath.” In particular to Rockefeller Center, and its impressive artwork, he writes:

It was not that Rockefeller, in a burst of civic generosity, decided to go all out. It was that everyone then was expected to go all out… All the things that make Rockefeller Center immediately winning–the statues of Prometheus and Atlas, the molded glass bas-reliefs–were just part of what you were expected to do.

Expectations can be immensely heavy. We often find ourselves, like Atlas, crushed by the weight of the world.

Tucked humbly behind the altar inside St. Patrick’s Cathedral—just a few hundred feet from Rockefeller’s statue of Atlas on Fifth Avenue—is a significantly smaller statue. This one is of Jesus. The Christ stands, but a child, effortlessly holding the world in the palm of his hand.

The Psalmist writes, “In his hand are the depths of the earth; the heights of the mountains are his also.… Oh come, let us worship and bow down.” The best reason to find ourselves kneeling is not because we’re buckling under the weight of the world, but because we’ve given ourselves in worship and submission to the one who holds it all effortlessly in his hands.