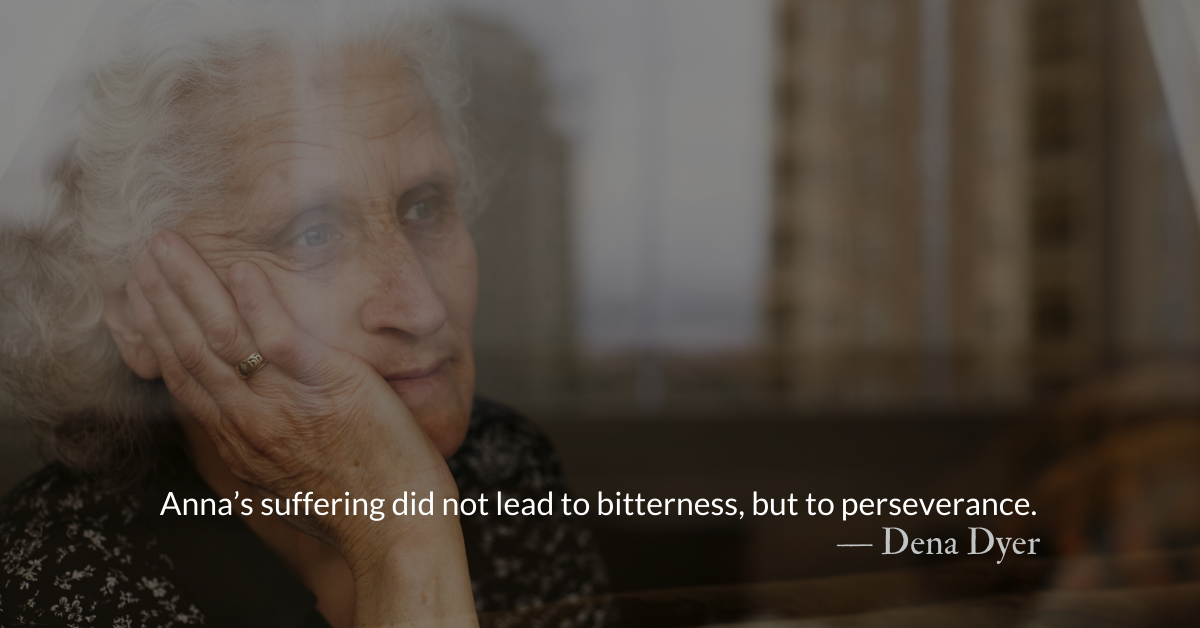 Scripture Focus: Luke 2.36-38
36 There was also a prophet, Anna, the daughter of Penuel, of the tribe of Asher. She was very old; she had lived with her husband seven years after her marriage, 37 and then was a widow until she was eighty-four. She never left the temple but worshiped night and day, fasting and praying. 38 Coming up to them at that very moment, she gave thanks to God and spoke about the child to all who were looking forward to the redemption of Jerusalem.

The prophetess Anna was widowed after only seven years of marriage. But instead of wallowing in grief, Anna dedicated herself to the service of the Lord and trusted that she would see the Messiah before she died. Upon seeing Jesus at his temple dedication, she gave thanks to God and spoke about Him to all who were looking forward to the redemption of Jerusalem. How good of God to allow Anna to see our Savior before she left this earth!

Anna recognized Jesus as the Promised One, thanking God for Him. She exemplifies Romans 5.2-5 (NIV): “And we boast in the hope of the glory of God. Not only so, but we also glory in our sufferings, because we know that suffering produces perseverance; perseverance, character; and character, hope. And hope does not put us to shame, because God’s love has been poured out into our hearts through the Holy Spirit, who has been given to us.”

Anna’s suffering did not lead to bitterness, but to perseverance. That perseverance formed her character. And her character, forged in the fires of waiting and worshipping, led this prophetess to a fervent hope of seeing God’s glory.

Do you and I have this kind of hope, one that isn’t fixated on what the world might give but what will most glorify God? Do our prayers focus on us and our problems, or on what will draw us closer to the heart of Jesus? Or does weariness win over worship?

Most days, my prayers are for financial provision or health for me and my loved ones, instead of for God’s glory to be shown and His purposes fulfilled.

Anna’s faithful love for the Savior convicts and challenges me. It breaks apart my excuses for not worshipping more (protests of “I’m too old/too tired/too weak/too busy” seem silly when I hold them up to her example) and points me towards a life of persistent, faithful surrender. Instead of waiting out her last years with worry, Anna stayed connected to God and His people. She was fruitful, and God multiplied her act of obedience.

During one particularly long waiting season, after running ahead of God in various ways, I confessed my impatience and frustration. During that moment, I distinctly felt the Holy Spirit say, “Don’t waste the waiting.” I understood this to mean that I was to submit and trust, instead of running ahead of my Heavenly Father. And after a time of repentance, I did just that. And though my situation remained the same, my next few months felt a lot more peaceful and joyful.

I wish I had allowed the season of unanswered prayer to turn me towards God and not away from Him. What if, like Anna, I had worshipped God instead of fretting? Instead, I wasted months when God could have been holding me close to His heart, teaching me His truths and growing my relationship with Him. It was my loss. I hope you’ll learn from my mistakes; don’t waste the waiting.

About Dena: Dena Dyer is an author of eleven books, including Wounded Women of the Bible: Finding Hope When Life Hurts with Tina Samples. She’s also a speaker, worship leader, Anglophile, and movie lover who lives with her husband, youngest son, and rescue pup near Fort Worth, Texas. In her day job, she serves as Executive Assistant to Jamie Aten, founder of Wheaton’s Humanitarian Disaster Institute. Find out more about Dena’s books and resources at her website or follow her on Instagram or Facebook.

Read more about Waiting at the Beautiful Gate
The man Peter and John heal in this passage is a man who waited.

Read more about How Are You Waiting?
When we do the joyful work of anticipation and preparation for Christ’s Advent, we may find that it is actually we who are coming home.