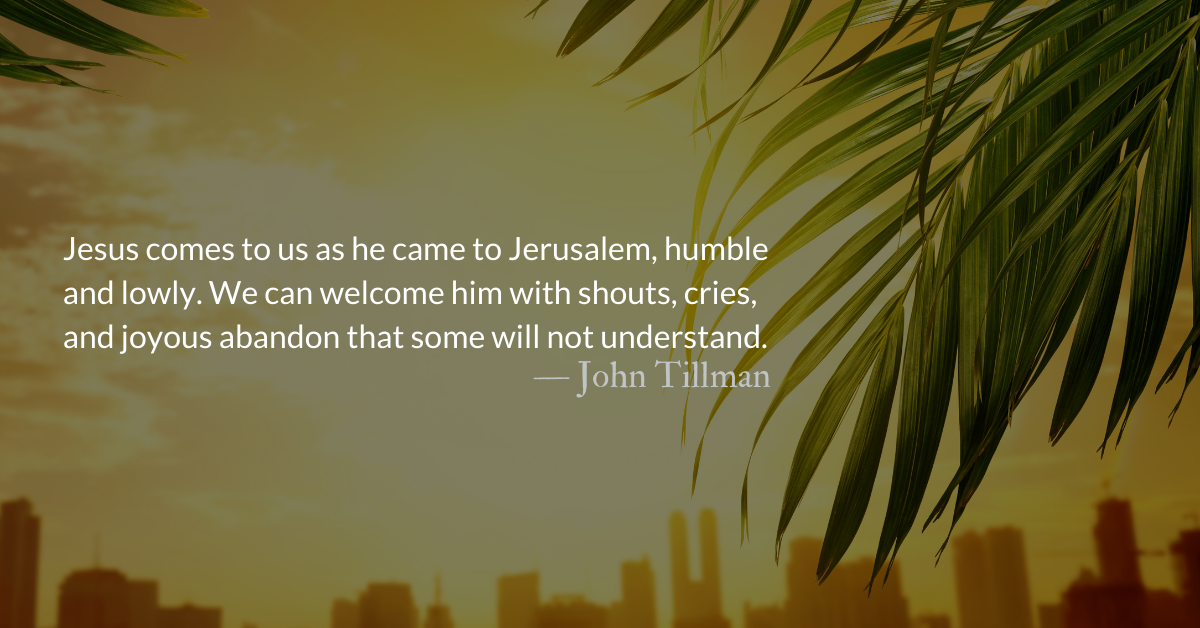 Daughters of Saul and Sons of Moses

1 Chronicles 15.29
29 As the ark of the covenant of the Lord was entering the City of David, Michal daughter of Saul watched from a window. And when she saw King David dancing and celebrating, she despised him in her heart.

Reflection: Daughters of Saul and Sons of Moses
By John Tillman

Like David’s procession of the Ark of the Covenant entering Jerusalem, Jesus’ processional was met by a joyous crowd. In both cases, there were those who wanted to steal the joy of the moment.

Michal, daughter of Saul and wife of David, critiqued the celebration. (1 Chronicles 15.29) She claimed to be concerned about propriety and modesty, but David’s response implied that her moralizing concealed a concern about power. (2 Samuel 6.20-23) The daughter of Saul despised this lowly king.

Likewise, religious leaders objected to crowds singing about Jesus “Hosanna to the Son of David! Blessed is he who comes in the name of the Lord!” (Psalm 118:25,26) They publicly voiced concerns about blasphemy but privately they were concerned about power. They didn’t want to upset Rome. (John 11.48) The sons of Moses despised this lowly teacher.

Psalm 105 is the Psalm listed in Chronicles as one David (or Asaph at David’s direction) sang on the occasion of the Ark’s entry. (1 Chronicles 16.7-11) However, despite Psalm 145 not having a date or event attached, one could certainly imagine its celebratory tone going well with the procession David led or the procession of Jesus the Son of David.

Those traveling up to Jerusalem would sing psalms on their ascent, preparing for and celebrating being in the presence of God. We can pray and sing these psalms with the same sense of anticipation. Jesus comes to us as he came to Jerusalem, humble and lowly. We can welcome him with shouts, cries, and joyous abandon that some will not understand.

Welcome him this week and every week as the only rightful king of our hearts. We must depose our affection for other Saul-like kings. We must abandon vestiges of religion which grasp at power rather than righteousness.

Do not let daughters of Saul or sons of Moses steal your joy in the lowly king, the humble teacher. Let us exalt him with pure praise and abandon. Let us ensure the next generation joins in with us.

Divine Hours Prayer: A Reading
…They cried out: “Blessed is he who is coming as King in the name of the Lord! Peace in heaven and glory in the highest heavens!” Some Pharisees in the crowd said to him, “Master, reprove your disciples,” but he answered, “I tell you, if these keep silence, the stones will cry out.” — Luke 19.37-40

Read more On Psalm 145: Praying as Music
If music is a universal language, prayer can be similarly described.

The King We Want

From a Curse to a Blessing