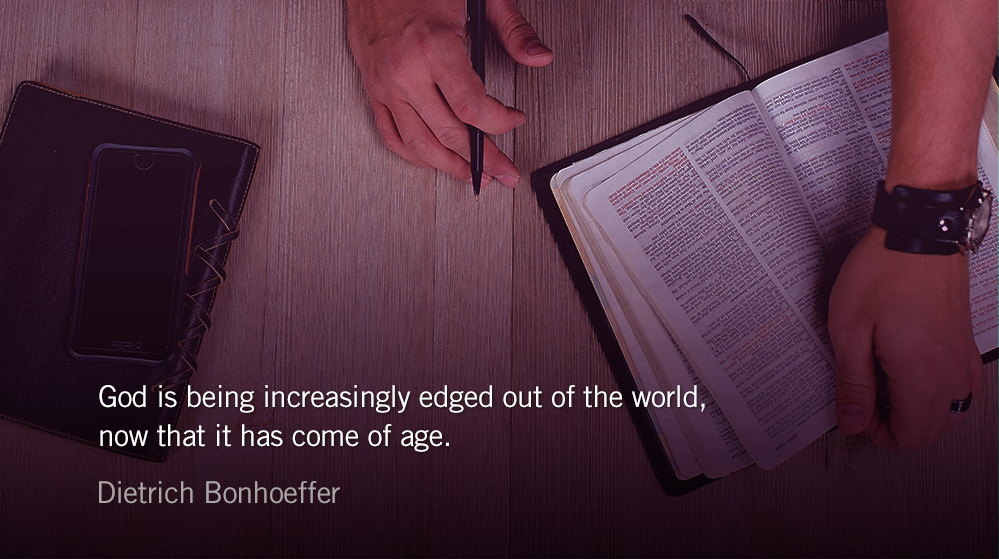 The Cross in the Modern World (Part I)

God is being increasingly edged out of the world, now that it has come of age.

Lenten Reflection: The Cross in the Modern World (Part I)
By Dietrich Bonhoeffer (1906-1945)

Knowledge and life are thought to be perfectly possible without God. Ever since Kant, he has been relegated to the realm beyond experience.

Theology has endeavored to produce an apologetic to meet this development, engaging in futile rear-guard actions against Darwinism, etc. At other times theology has accommodated itself to this development by restricting God to the so-called last questions as a kind of Deus ex machina.

When God was driven out of the world, and from the public side of human life, an attempt was made to retain him at least in the sphere of the ‘personal’, the ‘inner life’, the private life.

And since every man still has a private sphere, it was thought that he was most vulnerable at this point.

The secrets known by a man’s valet, that is, to put it crudely, the area of his intimate life from prayer to his sexual life have become the hunting ground of modern psychotherapists. In this way they resemble, though quite involuntarily, the dirtiest gutter journalists. Think of the newspapers which specialize in bringing to light the most intimate details about prominent people. They practice social, financial, and political blackmail on their victims: the psychotherapists practice religious blackmail. Forgive me, but I cannot say less about them.

This irresponsibility and absence of bonds has its counterpart among the clergy in what I should call the ‘priestly’ snuffing around in the sins of men in order to catch them out. It is as though a beautiful house could only be known after a cobweb had been found in the furthermost corner of the cellar, or as though a good play could only be appreciated after one had seen how the actors behave off-stage.

From the theological point of view the error is twofold. First, it is thought that a man can be addressed as a sinner only after his weaknesses and meannesses have been spied out. Second, it is thought that man’s essential nature consists of his inmost and most intimate background, and that is defined as his ‘interior life’; and it is in these secret human places that God is now to have his domain!

You see, this is the attitude I am contending against. When Jesus blessed sinners, they were real sinners, but Jesus did not make every man a sinner first. He called them out of their sin, not into their sin.

*Abridged from Dietrich Bonhoeffer’s Letters and Papers from Prison.

So teach us to number our days that we may apply our hearts to wisdom. —Psalm 90.12