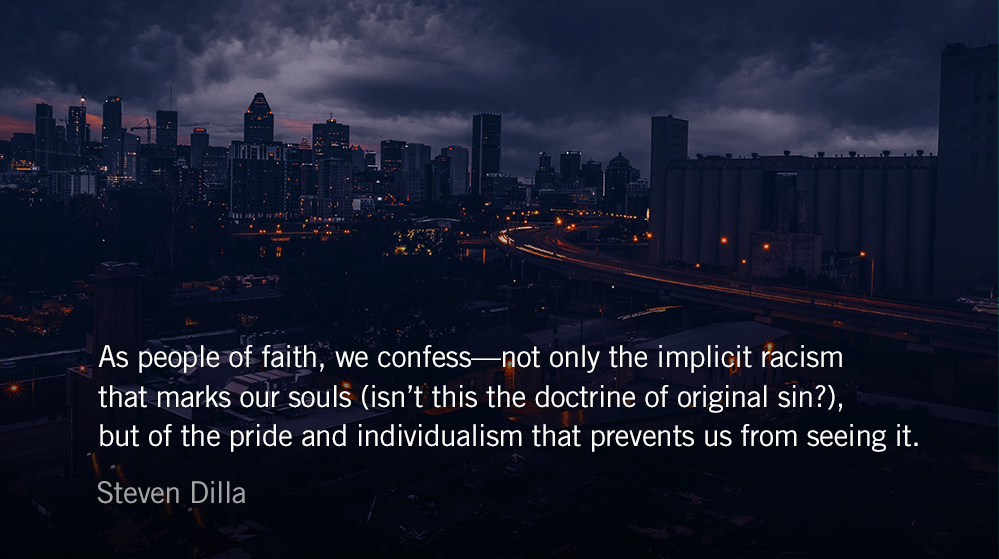 I have a “slight automatic preference for European Americans over African Americans.” Actually, if you ask me forthrightly, I say I have no preference—but an online bias test hosted by Harvard University exposes something I hate: the reality behind the quote above, which appears as my result after the test.

This is not a political piece. The Park Forum exists to cultivate vibrant faith and sharpen cultural insight through curated devotionals and scripture readings. Part of this calling requires we face the realities of living in a broken world—including confronting the darkness inside of ourselves.

Implicit racial bias is, thankfully, receiving a lot of press time right now. The live broadcast of events which are as old as our nation is forcing a conversation we need to have. Civil rights attorney and author Michelle Alexander writes:

I think we all know, deep down, that something more is required of us now. This truth is difficult to face because it’s inconvenient and deeply unsettling. And yet silence isn’t an option. On any given day, there’s always something I’d rather be doing than facing the ugly, racist underbelly of America. I know that I am not alone. But I also know that the families of the slain officers, and the families of all those who have been killed by the police, would rather not be attending funerals.

White American culture has been slow to acknowledge racial bias. One of the objections is that the entire argument is built on perceptions. And, to be fair, all races are guilty of interpreting data and reporting back a skewed perspective. “The evidence shows black delusions, too,” writes Nicholas Kristof:

My hunch is that we will likewise look back and conclude that today’s calls for racial justice, if anything, understate the problem—and that white America, however well meaning, is astonishingly oblivious to pervasive inequity.

Overwhelming research [shows] that blacks are more likely to be suspended from preschool, to be prosecuted for drug use, to receive longer sentences, to be discriminated against in housing, to be denied job interviews, to be rejected by doctors’ offices, to suffer bias in almost every measurable sector of daily life.

So where do we go from here? As people of faith, we confess—not only the implicit racism that marks our souls (isn’t this the doctrine of original sin?), but of the pride and individualism that prevents us from seeing it.

“The entire discussion of race in America centers around the protection of White feelings,” proclaims author John Metta. His sermon, I, Racist, is one of the most profound, heartbreaking, and powerful modern spiritual works I’ve ever read:

The reality of thousands of innocent people raped, shot, imprisoned, and systematically disenfranchised are less important than the suggestion that a single White person might be complicit in a racist system.

This is the country we live in. Millions of Black lives are valued less than a single White person’s hurt feelings.

This is not a political piece because it is a theological piece. As an author I frequently yield the final words of these devotionals to other thinkers. This expands the voice of The Park Forum beyond my own perspective. Here I do it again—this time to a black man who sees something about the world I must commit myself to understanding. He calls me to account in the way that I—as his brother in the faith—so desperately need. Mr. Metta, in his sermon to Bethel Congregational United Church of Christ, concludes:

I don’t like the story of the good samaritan. Everyone likes to think of themselves as the person who sees someone beaten and bloodied and helps him out.

If I could re-write that story, I’d rewrite it from the perspective of Black America. What if the person wasn’t beaten and bloody? What if it wasn’t so obvious? What if they were just systematically challenged in a thousand small ways that actually made it easier for you to succeed in life?

Would you be so quick to help then, or would you, like most White people, stay silent and let it happen.