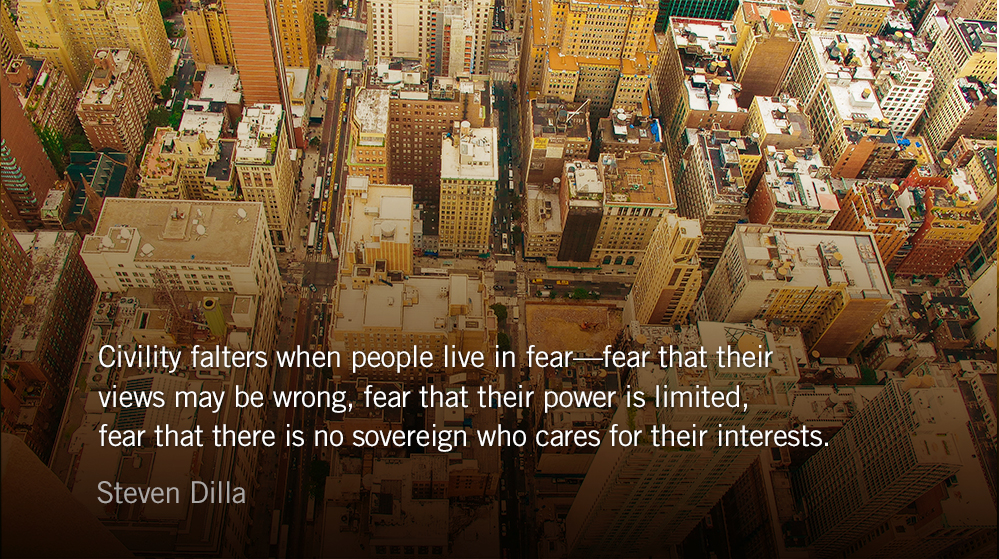 “In Hebrew the term dabar means both word and deed,” Frederick Buechner observes. “Thus, to say something is to do something.” Buchner explains:

Who knows what such words do, but whatever it is, it can never be undone. Something that lay hidden in the heart is irrevocably released through speech into time, is given substance and tossed like a stone into the pool of history, where the concentric rings lap out endless!

How many ripples have we suffered in this year of political rancor? The collective loss of civility has been mourned as often as it has inflicted wounds across the spectrum. Yet, Hua Hsu writes for the New Yorker, “The problem with civility is the presumption that we were ever civil in the first place.” Hsu continues:

Thanks to the Internet, we have become expert parsers of language, meaning, and authorial intent. We have grown obsessed with subtext. In other words, we live in very discursive times, when language seems to matter more than ever.

“See how a great forest is set aflame by such a small fire! And the tongue is a fire,” warns the book of James. How powerful would it be if the Church were to lead in the restoration of public civility in American culture?

For such a restoration to take place we would have to begin with confession. For while the nearly-endless coverage of this year’s broken discourse makes it feel different, it is far from abnormal. In a piece promoting the upcoming Civility In The Public Square event, Timothy Keller explains:

It could be argued that America has never really been a genuinely pluralistic, perspective-diverse, free society. We have never been a place where people who deeply differ, whose views offend and outrage one another, nonetheless treat each other with respect and hear each other out.

Those who have held the reins of cultural power—its greatest academic centers, its most powerful corporations, the media—have often excluded unpopular voices and minority views that fell on the wrong side of the public morality of the day.

In the 1980s and ’90s, many white evangelical Christians wanted to occupy those places of power, and showed little concern at the time to create a society that respected communities with sharply differing moral visions.

Civility falters when people live in fear—fear that their views may be wrong; fear that their power is limited; fear that there is no sovereign who cares for their interests. But the rhythms of civility restore what was lost in the fall, as Buechner concludes:

Words are power, essentially the power of creation. By my words I both discover and create who I am. By my words I elicit a word from you. Through our converse we create each other.