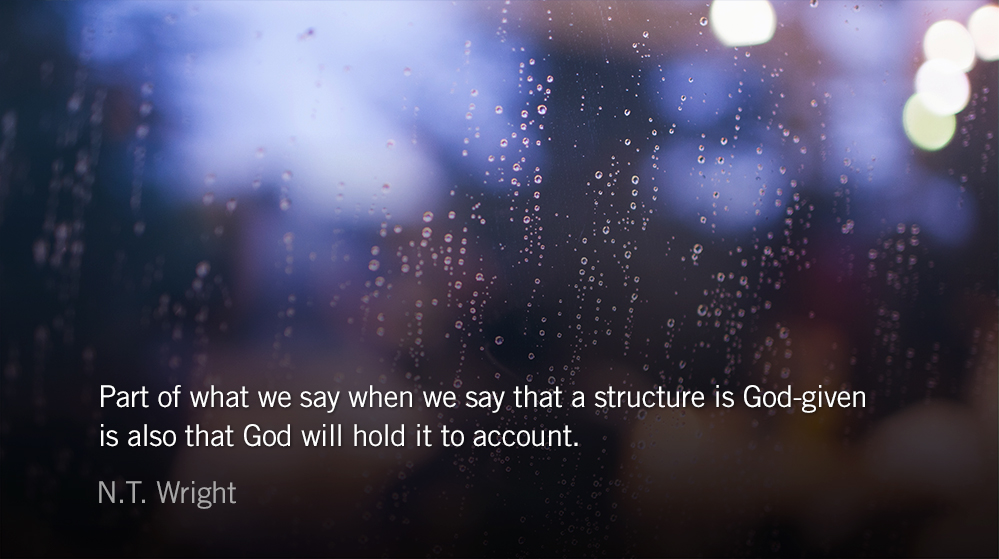 You shall call his name Jesus. He will be great and will be called the Son of the Most High. And the Lord God will give to him the throne of his father David, and he will reign over the house of Jacob forever, and of his kingdom there will be no end.” — Luke 1.31-33

In trying to understand that present reign of Jesus, though, we have seen two apparently quite different strands. On the one hand, we have seen that all the powers and authorities in the universe are now, in some sense or other, subject to Jesus. This doesn’t mean that they all do what he wants all the time, only that Jesus intends that there should be social and political structures of governance.

Jesus himself pointed out to Pilate that the authority that the Roman governor had over him and been given to him “from above.” Once that has been said, we should not only be shy about recognizing—however paradoxical it seems to our black and white minds—the God-givenness of structures of authority, even when they are tyrannical and violent.

Part of what we say when we say that a structure is God-given is also that God will hold it to account. We have trained ourselves to think of political legitimacy simply in terms of the method or mode of appointment (e.g., if you’ve won an election). The ancient Jews and early Christians were far more interested in holding rulers to account with regard to what they were actually doing. God wants rulers, but God will call them to account.

Where does Jesus come into all this? From his own perspective, he was himself both upstaging the power structures of his day and also calling them to account, then and there. That’s what his action in the Temple was all about. But his death, resurrection, and ascension were the demonstration that he was Lord and they were not.

The calling to account has, in other words, already begun—and will be completed at the second coming. The church’s work of speaking the truth to power means what it means because it is based on the first of these and anticipates the second.

What the church does, in the power of the Spirit, is rooted in the achievement of Jesus and looks ahead to the final completion of his work. This is how Jesus is running the world in the present.