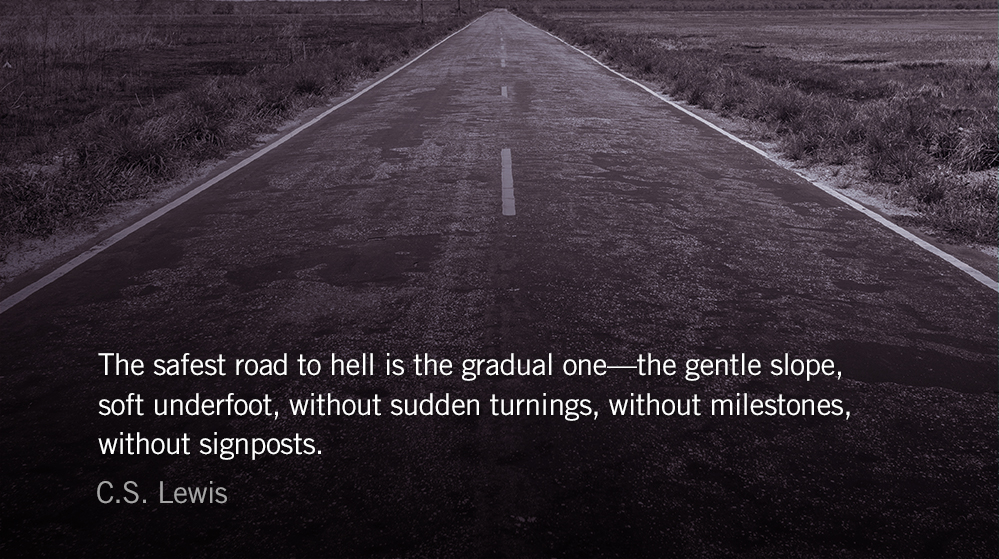 The safest road to hell is the gradual one—the gentle slope, soft underfoot, without sudden turnings, without milestones, without signposts.

But God brought his people out like a flock; he led them like sheep through the wilderness. He guided them safely, so they were unafraid; but the sea engulfed their enemies.

“Hell is the greatest monument to human freedom,” C.S. Lewis contends. Although the idea of hell is contentious in modern society, it is difficult to dismiss—our desire for justice demands punishment for the wicked. This tension is not new and symbolism found in the Psalms offers help reconciling a loving God and the idea of hell.

The sea was a place of terror for ancient people. Without modern maps, weather prediction, or the possibility of rescue, everyone knew someone who went out to sea and never returned. For Hebrew writers, the sea was a symbol of evil—one which God would destroy in the end.

The sea engulfing the enemies of God is one of evil meeting its full end. The ancient Egyptians brutally enslaved God’s people, callously disregarded God’s words, and relentlessly pursued Israel after their divine liberation. Evil’s consumption of itself was the natural crescendo of their wickedness.

The authors of scripture want us to read the story of the Exodus as our story. Jesus’ insistence that he is revealed in every scripture means that we can’t reject the idea of hell until we find Christ in our understanding of it.

Of those who reject the idea of hell Lewis asks:

What are you asking God to do? To wipe out their past sins and, at all costs, to give them a fresh start, smoothing every difficulty and offering every miraculous help? But He has done so, on Calvary. To forgive them? They will not be forgiven. To leave them alone? Alas, I am afraid that is what he does.

“There are only two kinds of people in the end: those who say to God, ‘Thy will be done’ and those to whom God says, in the end, ‘THY will be done,’” Lewis observes in The Great Divorce. “All that are in Hell choose it. Without that self-choice, there could be no Hell. No soul that seriously and constantly desires joy will ever miss it. Those who seek, find. To those who knock, it is opened.”

In your great mercy, O God, answer me with your unfailing help. —Psalm 69.15