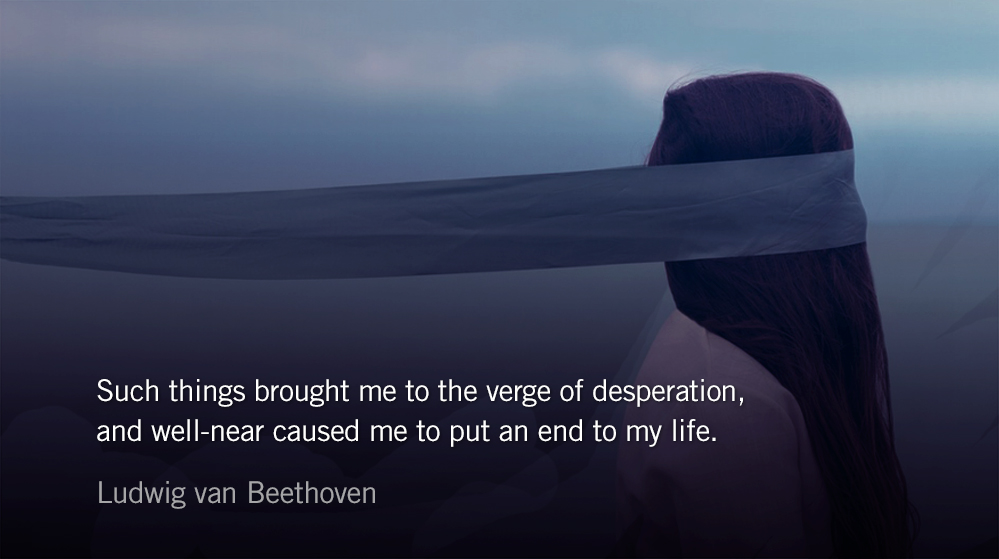 Prayer—though it is often draining, even an agony—is in the long term the greatest source of power that is possible.

Ludwig Van Beethoven began going deaf at age of 28. For the next decade and a half the master would suffer from excruciating ringing and pain as his auditory register eroded.

In a letter to his brothers Carl and Johann, Beethoven lamented not simply his loss in hearing, but what it meant socially, “No longer can I enjoy recreation, refined conversation, or mutual outpourings of thought. Completely isolated, I only enter society when compelled to do so.”

Early on, Beethoven’s physician sent him to a small town outside of Vienna to rest his hearing. It was during this respite the young maestro came to terms with his hearing loss—and almost committed suicide. He wrote of the experience in the Heiligenstadt Testament, named for the village in which he stayed:

What humiliation when any one beside me heard a flute in the far distance, while I heard nothing, or when others heard a shepherd singing, and I still heard nothing! Such things brought me to the verge of desperation, and well-near caused me to put an end to my life.

Art! Art alone deterred me. Ah! How could I possibly quit the world before bringing forth all that I felt it was my vocation to produce? And thus I spared this miserable life—so utterly miserable that any sudden change may reduce me at any moment from my best condition into the worst.

The letter seems to be a record of Beethoven working through his suffering in real time—finding new meaning and depth in life. In the Testament he instructs his brother to:

Recommend Virtue to your children; that alone, and not wealth, can ensure happiness. I speak from experience. It was Virtue alone which sustained me in my misery; I have to thank her and Art for not having ended my life by suicide.

In addition to the Heiligenstadt Testament, Beethoven would pen Symphony No. 3—the profound turning point in his career. The depth and vitality of the third symphony parallel the note Beethoven scribed on the outside of his Testament:

Almost as I came, I depart. Even the lofty courage that so often animated me in the lovely days of summer is gone forever. O Providence! Vouchsafe me one day of pure felicity! How long have I been estranged from the glad echo of true joy! When! O my God! When shall I again feel it in the temple of Nature and of man? — Never? Ah! that would be too hard!

Let me seek the Lord while he may still be found. I will call upon his name; while he is near.