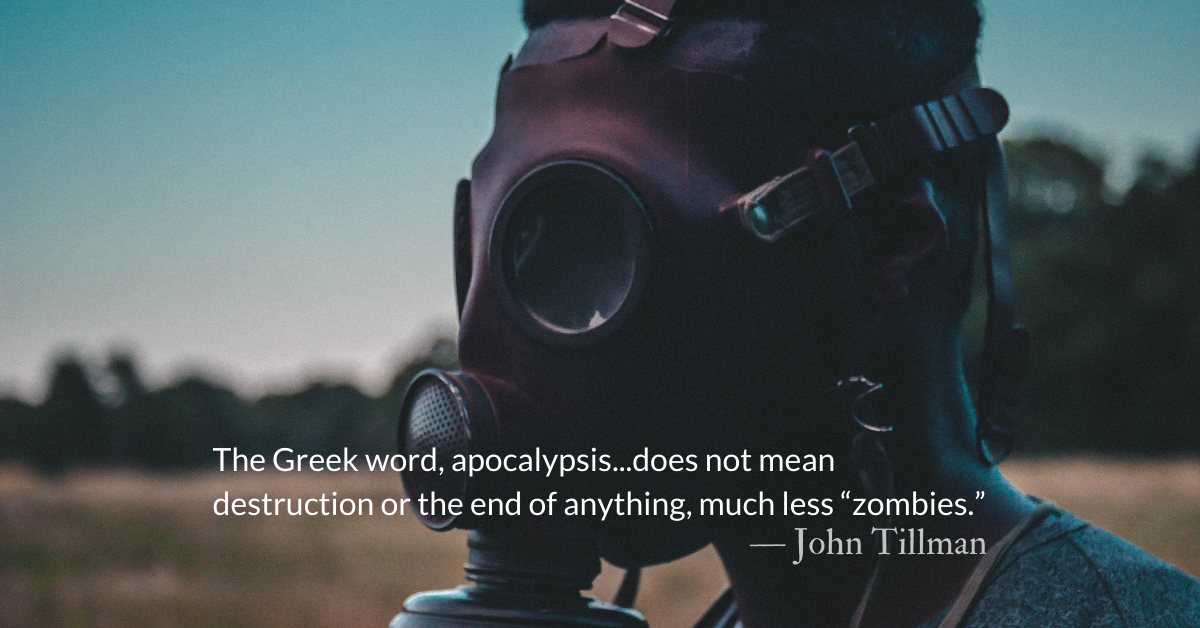 Scripture Focus: Ezekiel 11.13
Then I fell facedown and cried out in a loud voice, “Alas, Sovereign LORD! Will you completely destroy the remnant of Israel?”

Reflection: Apocalypse, How?
By John Tillman

Today, we think of an “apocalypse” as a kind of ending event, involving widespread destruction, suffering, and death.

Apocalypses come in different flavors from zombies to aliens, from resurrected dinosaurs to natural disasters. Some of our apocalyptic tastes can be quite bizarre. Who would have guessed in 2013 that by 2020 there would be five sequels to Sharknado?

The popularity of “apocalypse” in entertainment has even spawned industries supporting “preppers” who stock up on guns, ammo, food, supplies, or whatever they may need for various kinds of apocalyptic scenarios.

We have apocalypses all wrong.

The Greek word, apocalypsis, does not mean destruction or the end of anything, much less “zombies.” Apocalypsis means unveiling or revealing, and it is the Greek title of the book we call “Revelation.” But the book called Apocalypsis or Revelation isn’t the only apocalyptic part of the Bible. There are many books, poems, writings, and stories that are considered “apocalyptic” in nature. Some “apocalypses” are violent, some are not.

Jesus told his disciples that he would “apocalypse” the father to them, meaning that he would reveal to them God the Father. In fact, Jesus’ entire ministry could be described as one long, loving apocalypse, revealing to us what God is like. “Anyone who has seen me has seen the Father…” (John 14.9)

When we read an “apocalyptic” passage in the Bible, we need to remember that something is being revealed or exposed.

In Ezekiel’s vision, the suffering he witnessed caused him to fall to his knees and cry out, fearing that all would be destroyed. This is often our fear as well, which is revealed in our fictional apocalypses. Name your fear and there’s an apocalypse flavor catering to it. We fear the breakdown of society and human nature? Hollywood gives us zombies. We fear the destruction of irresponsible science and business? Hollywood gives us Jurassic Park. Our “apocalypses” are revealing after all. They reveal things about us.

Ezekiel did not fully understand the depth of Judah’s sin until he saw the horrifying visions he records. Many times, it takes a moment of horror for us to be forced to confront our own sin. Our sin will be “apocalypsed” to us. But how?

What sin have you glossed over or covered that God might “apocalypse” to you?
What spiritual “prepping” have you done that might aid you?
Are you ready for an apocalypse?

Divine Hours Prayer: The Request for Presence
Open my eyes, that I may see the wonders of your law. — Psalm 119.18
– Divine Hours prayers from The Divine Hours: Prayers for Summertime by Phyllis Tickle

Read more about Prepare for the End
Whenever and however “the end” comes, we can be soberly prepared, watchfully vigilant, and unwaveringly hopeful.

Read more about How to Read Prophetic Judgment
There are many prophecies of the Old and New Testaments that are meant to comfort us. But the more typical function of prophecy is to cause us discomfort.