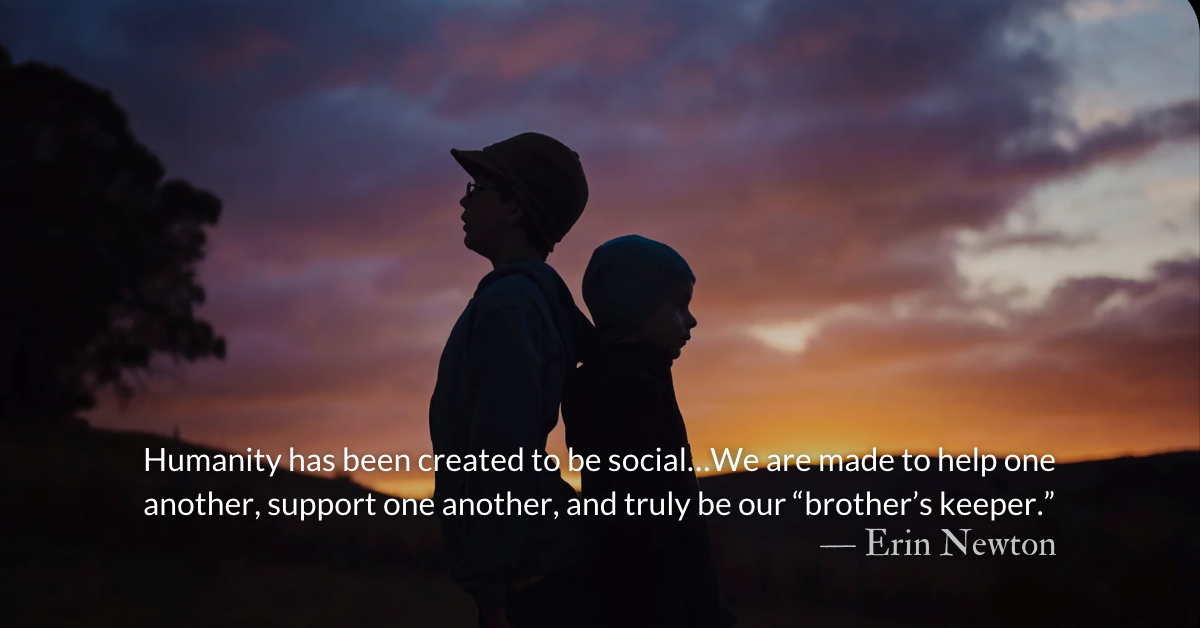 We are Socially Responsible

Scripture Focus: Genesis 4:9
Then the Lord said to Cain, “Where is your brother Abel?”
“I don’t know,” he replied. “Am I my brother’s keeper?”

Reflection: We are Socially Responsible
By Erin Newton

As swiftly as sin breaks the peace between God and Adam, sin devours the hearts of his children. The story of Cain and Abel is an infamous tale of sibling rivalry, jealousy, and the first recorded murder in the Bible.

The quarrel between Cain and Abel is one-sided. Abel has done nothing wrong. He is a bystander in the story. He is, obviously, the victim.

When God looks favorably upon Abel’s sacrifice and not on Cain’s, anger brews in Cain’s heart. Why? Well, scholars are not entirely sure. It could be that he was prone to anger. It could be jealousy of his brother. It could be from a sense of entitlement and not being recognized for his efforts.

The text is not entirely clear about why God rejected the sacrifice either. All the characters seem to be aware of the religious protocol and Cain must have cut some corners.

Sin grows from anger in his heart to murder by his hands. Sin magnifies where self-control diminishes.

Cain kills his brother and, when confronted, he pulls an Adam-like response: deflecting blame. Cain deflects responsibility. Am I my brother’s keeper?

Cain knew Abel’s location. It was right where he left his body. Cain only cared about Cain.

Our world is built around individualism. Prosperity is only for those who help themselves. No hand-outs.

But what is our social responsibility to one another? Is it merely refraining from physical harm? Would Cain have been ok if he had just let Abel live?

God warned Cain that he needed to act rightly. Sin was prowling, looking for a victim, someone who could take the blame or become an outlet for hate.

The story of Cain is usually read as a warning about murder. The story is reduced to its most obvious features. Don’t murder. Sin is crouching. Cain bad. Abel good.

This simplistic idea misses the social impact of the text. Humanity has been created to be social. That social feature of our being is not for individual happiness or individual success. We are made to help one another, support one another, and truly be our “brother’s keeper.”

Not murdering one another is the lowest possible bar we could set for ourselves. As the Bible continues to unfold, we will see how God intended for us to care for each other in sickness and health, for better or worse, from womb to tomb.

Divine Hours Prayer: A Reading
Jesus taught the people, saying: “I tell you most solemnly, everyone who commits sin is a slave. Now a slave has no permanent standing in the household, but a son belongs to it forever. So if the son sets you free, you will indeed be free. — John 8.34-36

Read more about Supporting Our Work
Please consider becoming a one-time or monthly donor! We need your support to continue and expand our work.

Read more about Reading The Bible With Us
Join us to read through the Bible at a sustainable, two-year pace, with time for reflection and growth from each day’s passage.
https://mailchi.mp/theparkforum/m-f-daily-email-devotional