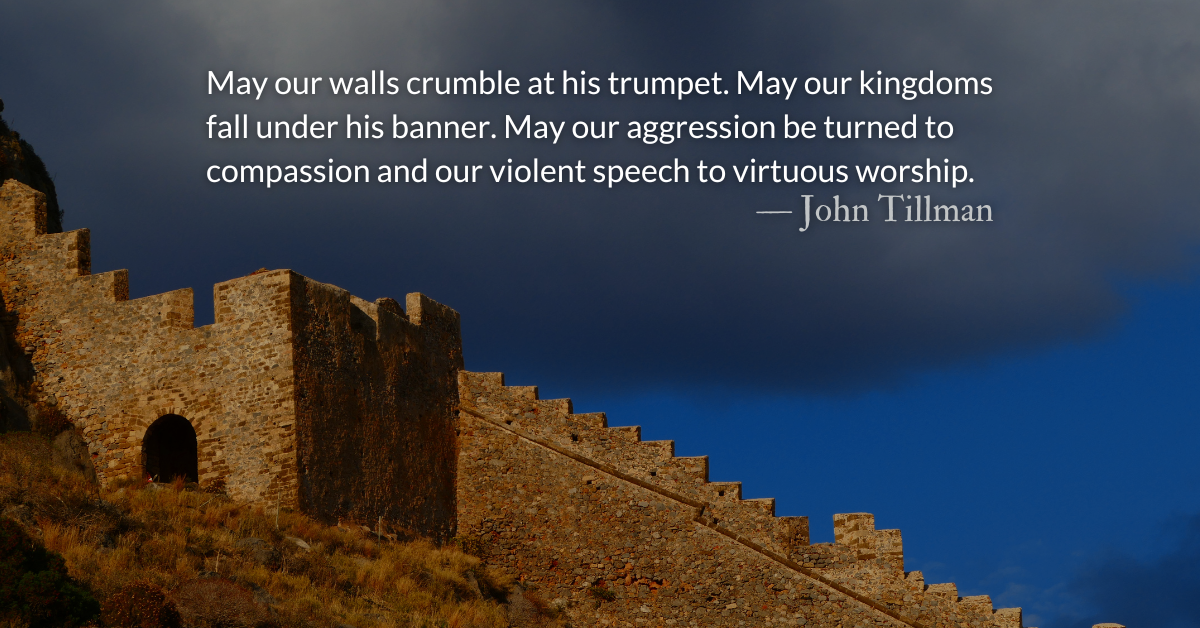 Scripture Focus: Isaiah 18.2b-3
2 … Go, swift messengers,
to a people tall and smooth-skinned,
to a people feared far and wide,
an aggressive nation of strange speech,
whose land is divided by rivers.
3 All you people of the world,
you who live on the earth,
when a banner is raised on the mountains,
you will see it,
and when a trumpet sounds,
you will hear it.

Luke 1.76-79
76 And you, my child, will be called a prophet of the Most High;
for you will go on before the Lord to prepare the way for him,
77 to give his people the knowledge of salvation
through the forgiveness of their sins,
78 because of the tender mercy of our God,
by which the rising sun will come to us from heaven
79 to shine on those living in darkness
and in the shadow of death,
to guide our feet into the path of peace.”

All nations will see God’s banner.
All people will hear God’s trumpet.

To us, a banner might seem festive. A trumpet might play a melody or a song. This is not Isaiah’s meaning. The “banner” is not about celebration but confrontation. It is a military symbol, a standard that would be borne into battle or before a king’s processional. It announces a conquering army, not a celebrative party.

The trumpet denotes not the melodies of a tune but the movements of war. Trumpets of war signal attack. Trumpets preceded the tumbling of Jericho’s walls and Gideon’s triumph over the Midianites. Trumpets also signal coronations. Trumpets announce the enthronement of a new ultimate authority. The trumpet and banner mean that a battle has been won, a coronation is occurring, and a new king and his kingdom are being announced.

Zechariah saw in his son, John, a proclaimer of God’s coming kingdom. John’s banner had one word and his trumpet one note, “repent.” Whether kings, soldiers, tax collectors, or regular citizens, John told the powerful to stop abusing their power. (Luke 3.10-14) Ultimate power was coming and all would be called to submit to him—even John himself.

Isaiah saw victory in the future, and all people streaming to worship under the banner of God, the king of kings. People who were feared would peacefully worship God. People who were aggressive and violent would bring gifts to God’s temple. People of strange, intimidating speech would open their mouths in worship.

Before Christ conquers the world, we must allow him to conquer our hearts. May our walls crumble at his trumpet. May our kingdoms fall under his banner. May our aggression be turned to compassion and our violent speech to virtuous worship.

This is what we work towards. This coming kingdom that John announced, we still announce. Sometimes we do so with abounding hope. Other times, like John languishing in prison or Isaiah, disturbed by his visions, we may despair, wondering how far off this kingdom truly is. But even in doubt, Christ points us to his finished work. (Matthew 11.4-6) To John, he pointed out healings and signs but Jesus points us to his cross and the empty tomb.

May we, like John, point the powerful toward repentance.
May we lower our flags of allegiance under his banner of love.
May we declare the ultimate victory of Jesus, freeing all people from the kingdoms of sin and darkness.

Read more about No Such Thing as God Forsaken
May we resist the urge to apply judgmental texts to others before we have humbly examined our own hearts.

Read more about Jesus with Axe and Fire
May we ask him regularly to cut down our idols. May he burn out of our souls impurity and selfish desires.