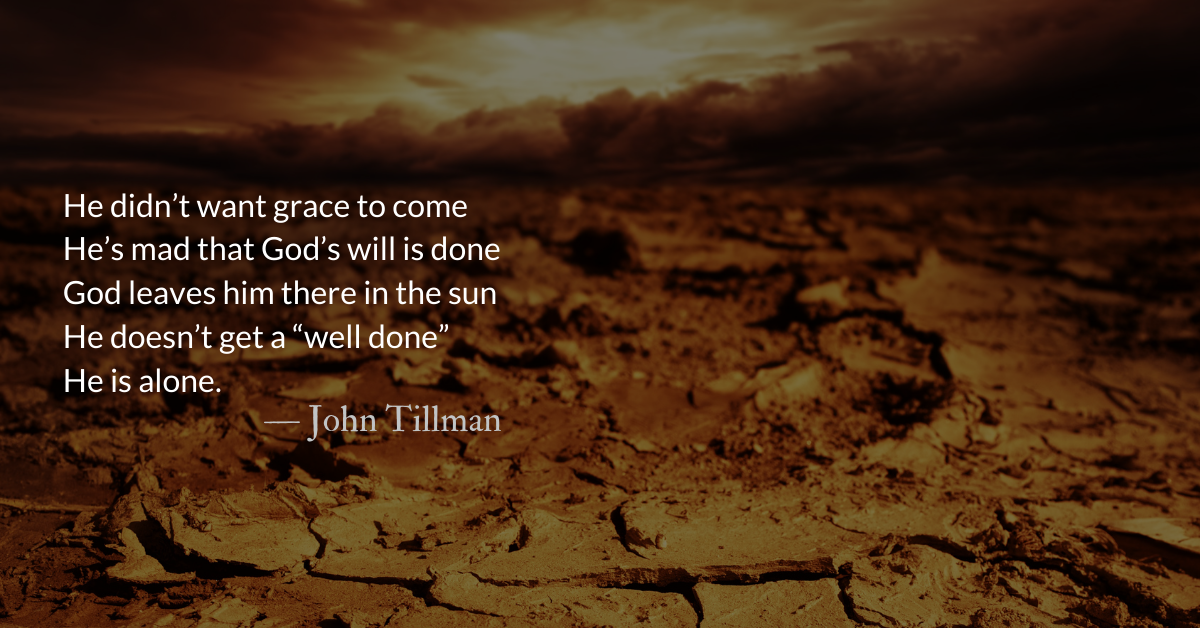 Scripture Focus: Jonah 4.1-4, 9-11
1 But to Jonah this seemed very wrong, and he became angry. 2 He prayed to the LORD, “Isn’t this what I said, LORD, when I was still at home? That is what I tried to forestall by fleeing to Tarshish. I knew that you are a gracious and compassionate God, slow to anger and abounding in love, a God who relents from sending calamity. 3 Now, LORD, take away my life, for it is better for me to die than to live.” 4 But the LORD replied, “Is it right for you to be angry?”

9 …“It is,” he said. “And I’m so angry I wish I were dead.”
10 But the LORD said, “You have been concerned about this plant, though you did not tend it or make it grow. It sprang up overnight and died overnight. 11 And should I not have concern for the great city of Nineveh, in which there are more than a hundred and twenty thousand people who cannot tell their right hand from their left—and also many animals?”

In some ways, Jonah is the maddest prophet. He is madder than the angriest and most vitriolic of scripture’s prophets. However, his anger is directed at God because of God’s mercy.

In some ways, Jonah is also the saddest prophet. He is sadder than even Jeremiah the weeping prophet. Unlike Jeremiah, Jonah is alone in his emotional trap of hate. He doesn’t experience any of the hope God has to offer, because the only hope he is interested in is the destruction of his enemies.

He doesn’t want a savior. He wants a weapon. God will not be made into a tool for us to destroy our enemies.

The Maddest, Saddest Prophet
God’s word, Jonah didn’t care for
The people he hated, therefore
He started out with a detour
Down the road to the seashore
Sailors didn’t know they were in for
Finding what God had in store
He had mercy.

In the storm, Jonah’s waking
To a mess of his making
On a flight of his taking
In a ship that was shaking
Sailors knees they were quaking
Very soon they’d be sinking
They were desperate.

Jonah’s crimes he confessed
Sailors reacted, distressed
To save him they do their best
Nautical skill and finesse
But couldn’t escape unless…
Jonah’s God they addressed,
“Please forgive us.”

They toss him in. Jonah’s sinking
Gulped down by a fish, stinking
Of God’s temple, he’s thinking
God’s mission he is accepting
Rebellion he is rejecting
Out of the depths, he is getting
Resurrected

He sets out upon his trek
His obedience is correct
The message he won’t neglect
But doesn’t want its effect
to blossom. He wants a wreck.
God’s love he doesn’t respect
He is bitter.

It didn’t sit right with him
Forgiveness was just for him
Not for the Assyrians
That’s why he sailed on the wind
He thought God’s purpose to bend
Hoped they would die in their sin
He was vengeful.

He hates that wrath was undone
He longed to see destruction
He didn’t want grace to come
He’s mad that God’s will is done
God leaves him there in the sun
He doesn’t get a “well done”
He is alone.

May we promote repentance
Rather than long for vengeance
May we be love and joy-filled
Not revengeful and rage-filled
May we reshape our preference
Increasing love and acceptance.
For the gospel

Divine Hours Prayer: The Morning Psalm
I will exalt you, O Lord, because you have lifted me up and have not let my enemies triumph over me.
O Lord my God, I cried out to you, and you restored me to health.
You brought me up, O Lord, from the dead; you restored my life as I was going down to the grave.
Sing to the Lord, you servants of his; give thanks for the remembrance of his holiness.
For his wrath endures but the twinkling of an eye, his favor for a lifetime. — Psalm 30.1-5
– Divine Hours prayers from The Divine Hours: Prayers for Autumn and Wintertime by Phyllis Tickle

Read more about Too Much to Hold
Like Jonah sunk, beneath the earth
A dark and hopeless pit
Into that pit our savior slides
His mission: open it

Read more about Abandon Human Vengeance
Vengeance breeds hatred, and hatred fuels vengeance. This pattern is not new, but it is accelerating.