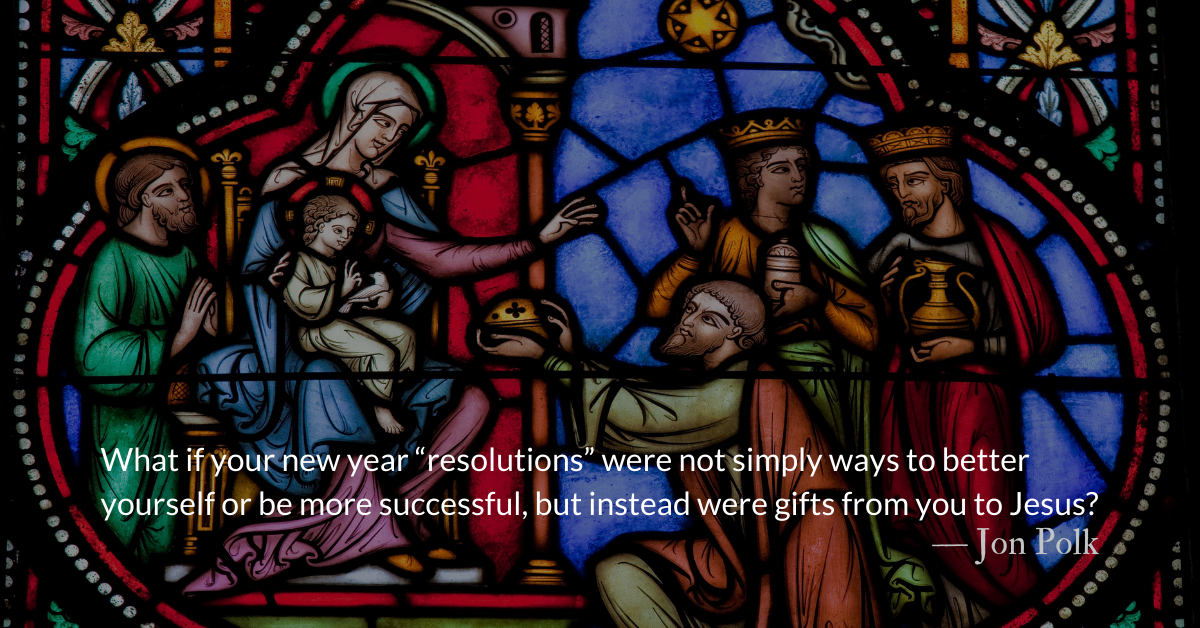 We Three Kings — Carols of Epiphany

Scripture Focus: Psalm 10.16
The Lord is King forever and ever;
the nations will perish from his land.

Matthew 2.1-2, 11
1 After Jesus was born in Bethlehem in Judea, during the time of King Herod, Magi from the east came to Jerusalem 2 and asked, “Where is the one who has been born king of the Jews? We saw his star when it rose and have come to worship him.”

11 On coming to the house, they saw the child with his mother Mary, and they bowed down and worshiped him. Then they opened their treasures and presented him with gifts of gold, frankincense and myrrh.

From John: We are thrilled to have a “bonus” carol from Jon Polk today, on Epiphany, sometimes called, “Three Kings Day” or the twelfth day of Christmas. Epiphany is the true conclusion of the season of Christmas, called Christmastide, and the true purpose of the incarnation is revealed to us in it. Christ is a gift to all people but today, he receives gifts fit for worship.

Reflection: We Three Kings — Carols of Epiphany
By Jon Polk

Have you ever been to a birthday party where guests received gifts but not the one having the birthday?

January 6 on the Christian calendar is known as Epiphany, the celebration of the gifts and journey of the Magi.

“We Three Kings” was the first widely popular carol written in America. Composed in 1857 by Episcopal minister and church music instructor at General Theological Seminary in New York, John Henry Hopkins, Jr., the song was created for a Nativity pageant at the seminary.

We three kings of Orient are;
Bearing gifts we traverse afar,
Field and fountain, moor and mountain,
Following yonder star.

For dramatic purposes, Hopkins assigned a gift and a verse to three Magi, traditionally named Caspar, Melchior and Balthazar. Note that Matthew’s account mentions three gifts, not three men. In some Christian traditions, they are twelve in number.

Furthermore, there is no indication in Matthew that they were kings. The word magi refers to astrologers, thus their interest in following a star. Not royalty, but most certainly foreigners, these Magi were likely familiar with Hebrew prophecies.

Despite these slight missteps the carol makes, Hopkins does a fine job describing the symbolism of the gifts.

Born a King on Bethlehem’s plain,
gold I bring to crown him again

Gold is the most frequently mentioned valuable metal in scripture, used as currency but also for making jewelry, ornaments, and utensils for royalty. This gift is fit for a king.

Frankincense to offer have I
Incense owns a Deity nigh

Frankincense, derived from Boswellia tree resin, produces a sweet odor when burned and was part of the incense allowed on the altar. This gift is fit for worship.

Myrrh is mine; its bitter perfume
Breathes a life of gathering gloom

Myrrh, sap from a small tree in Arabia, was used as a perfume and to stifle the smell of a dead body before burial. This gift is fit for death.

As astrologers, not royalty, the gifts came at a significant financial cost to the Magi. Traveling from as far away as Persia, a two-year journey, required time and energy. These gifts were sacrificial, intended for worship.

However, what do we do at Christmas time? We give gifts to everyone but the guest of honor himself.

What if this year you begin a new tradition? What if your new year “resolutions” were not simply ways to better yourself or be more successful, but instead were gifts from you to Jesus?

What present would you give Jesus? More time in prayer or Bible study? Kicking a habit that is holding back your spiritual growth? Focusing attention less on yourself and more on those around you?

If you give Jesus a gift this year, what will it be? Following the example of the Magi, let it be sacrificial and intended for worship.

Divine Hours Prayer: The Call to Prayer
Sing to the Lord and bless his Name; proclaim the good news of his salvation from day to day.
Declare his glory among the nations and his wonders among all peoples.
For great is the Lord and greatly to be praised; his is more to be feared than all gods. — Psalm 96.2-4

Join us! Walk through the Bible with us…
Walk with friends through God’s Word this year… Read, Reflect, Pray… Repeat.
https://mailchi.mp/theparkforum/m-f-daily-email-devotional

Read more about Unwrapping Christ’s Gifts :: Epiphany
May we wear Christ’s gifts prominently, like new…clothing. Through the wearing, may we allow them to transform us into the manifestation of the giver. 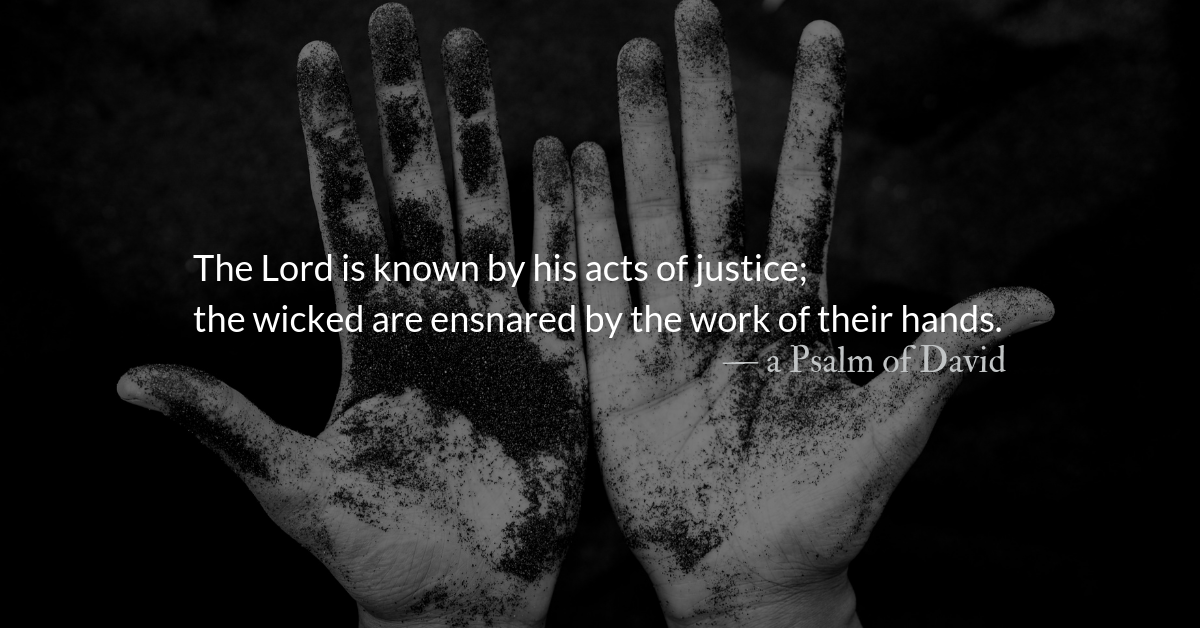 The Righteous Judge :: A Guided Prayer

Psalm 9.7-8
The Lord reigns forever;
he has established his throne for judgment.
He rules the world in righteousness
and judges the peoples with equity.

From John:
Some scholars believe that Psalm nine and ten were originally one Psalm. Today we combine them in a prayer to God, the only righteous judge and the only one who dispenses justice without failing. May he hear the cries of all victims. May he bring every wrong-doing to light. May those who seek to cover their secrets have their plans exposed by his light and truth.

Reflection: The Righteous Judge :: A Guided Prayer
By John Tillman

May our highest, most prized right, be to stand before you.

For you have upheld my right and my cause,
sitting enthroned as the righteous judge.

May we learn from you, true judgement.
Make us a part of bringing your kingdom, your justice and righteousness on earth.
And this is your justice on earth—to be a refuge and stronghold for the weak and troubled.

He rules the world in righteousness
and judges the peoples with equity.
The Lord is a refuge for the oppressed,
a stronghold in times of trouble…
he does not ignore the cries of the afflicted.

The Lord is known by his acts of justice;
the wicked are ensnared by the work of their hands.
But God will never forget the needy;
the hope of the afflicted will never perish.
Arise, Lord, do not let mortals triumph;
let the nations be judged in your presence.

The world hates us, because it first hated you, Lord.
Trouble comes to us in different ways and in different levels of severity, in every corner of this world, God.

Why, Lord, do you stand far off?
Why do you hide yourself in times of trouble?
In his arrogance the wicked man hunts down the weak,
who are caught in the schemes he devises.
He says to himself, “Nothing will ever shake me.”
He swears, “No one will ever do me harm.”
His mouth is full of lies and threats;
trouble and evil are under his tongue.

In times of trouble, Lord, we look to you.
Do not abandon us to the schemes of the wicked.

But you, God, see the trouble of the afflicted;
you consider their grief and take it in hand.
The victims commit themselves to you;
you are the helper of the fatherless.
Break the arm of the wicked man;
call the evildoer to account for his wickedness
that would not otherwise be found out.

You, Lord, hear the desire of the afflicted;
you encourage them, and you listen to their cry,
defending the fatherless and the oppressed,
so that mere earthly mortals
will never again strike terror.

We commit ourselves to you, O Lord.
See our trouble. Hear our cry. Take our grief.
Give us courage to shake the world with your love.

Prayer: The Morning Psalm
For God alone my soul in silence waits; truly, my hope is in him. He alone is my rock and my salvation, my stronghold, so that I shall not be shaken. — Psalm 62.6-14

Read more about The Commission of Truth
We are acting according to our nature and our calling when we help facts come to light and when we stand up for truth and for truth-tellers.

Read more about Honoring The Truth
Seeking the truth is not only a spiritual quest. It is sometimes a civic one. Or a legal one. As followers of Christ, the Truth, we should ask, seek, and knock, not giving up until the truth is revealed.