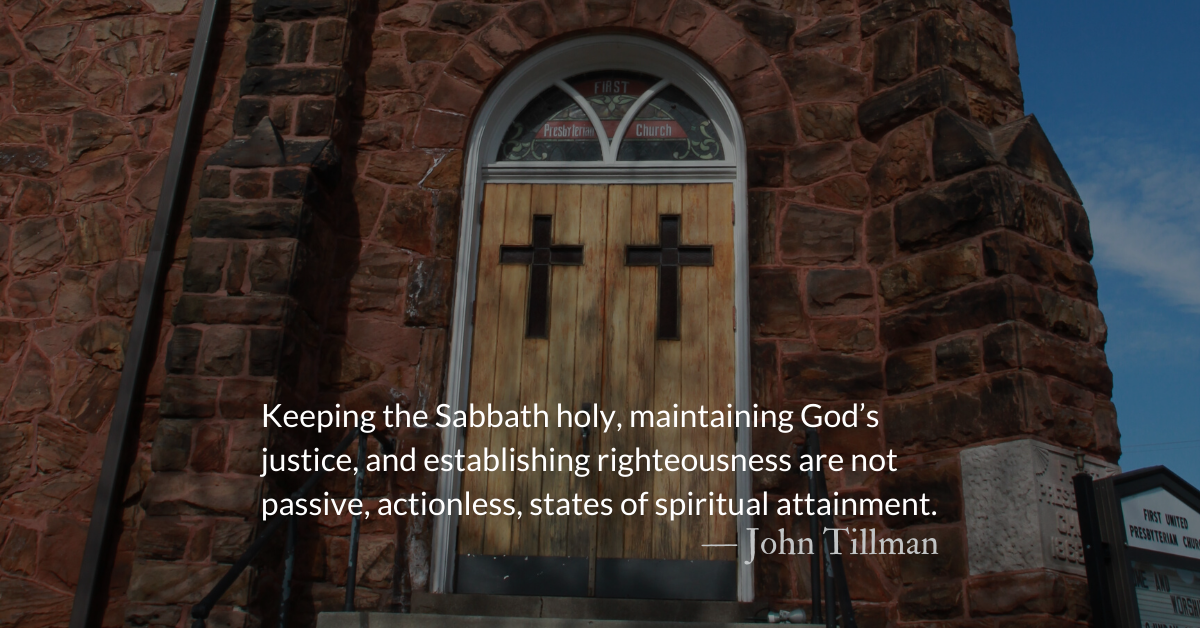 Keeping the Sabbath by Action

Scripture Focus: Jeremiah 17.21-23
21 This is what the LORD says: Be careful not to carry a load on the Sabbath day or bring it through the gates of Jerusalem. 22 Do not bring a load out of your houses or do any work on the Sabbath, but keep the Sabbath day holy, as I commanded your ancestors. 23 Yet they did not listen or pay attention; they were stiff-necked and would not listen or respond to discipline.

Mark 3.4-6
4 Then Jesus asked them, “Which is lawful on the Sabbath: to do good or to do evil, to save life or to kill?” But they remained silent.
5 He looked around at them in anger and, deeply distressed at their stubborn hearts, said to the man, “Stretch out your hand.” He stretched it out, and his hand was completely restored. 6 Then the Pharisees went out and began to plot with the Herodians how they might kill Jesus.

Reflection: Keeping the Sabbath by Action
By John Tillman

There is more than one way to desecrate the Sabbath.

The way of “keeping the Sabbath holy” that we commonly think of is by limiting what we do. We refrain from doing work. We focus on spiritual matters. We prioritize worship. This is the kind of warning that Jeremiah was sent to cry. “Stop the clamour of commerce.” “Stop the wheels of wealth accumulation,” the prophet says. But Jesus defines a second requirement to keep the Sabbath holy.

Jeremiah banned commerce on the Sabbath because the day was intended to be about the worship of God and enriching the community rather than one’s self. Instead, over the centuries, the restrictions of the Sabbath had become excuses for selfish inaction. The experts of the law used their expertise to dodge responsibility rather than shoulder it and to accumulate wealth and power rather than honor God with it.

There’s more than one way to make Jesus angry.

Inaction in the face of someone who needs help is one way that is very reliable. Jesus burns with anger for their heartlessness, but it’s more than activism—Jesus takes action. When we get angry, we tend to cause harm. When Jesus gets angry, he heals.

Jesus was angry because these teachers were doing what the wealthy of Jerusalem were doing in Jeremiah’s day. They were tying up heavy loads for others to carry, (and on the Sabbath, no less) but would not lift a finger to help them.

May our holiness surpass that of the religious leaders, as Jesus prayed it would.
May we not live in prayerlessness during the week and expect God to show up on the weekend.
May we fulfill the Sabbath by worshiping in spirit and truth.
May we not desecrate the Sabbath with inaction in the face of need.

Divine Hours Prayer: The Refrain for the Morning Lessons
He looks at the earth and it trembles; he touches the mountains and they smoke. — Psalm 104.33

Read more about The Focus of Christ’s Anger
It isn’t too often we see Jesus angry, so it makes sense to pay close attention to when and why it happens.

#ReadersChoice is time for you to share favorite Park Forum posts from the year.
What post helped you pray more passionately?