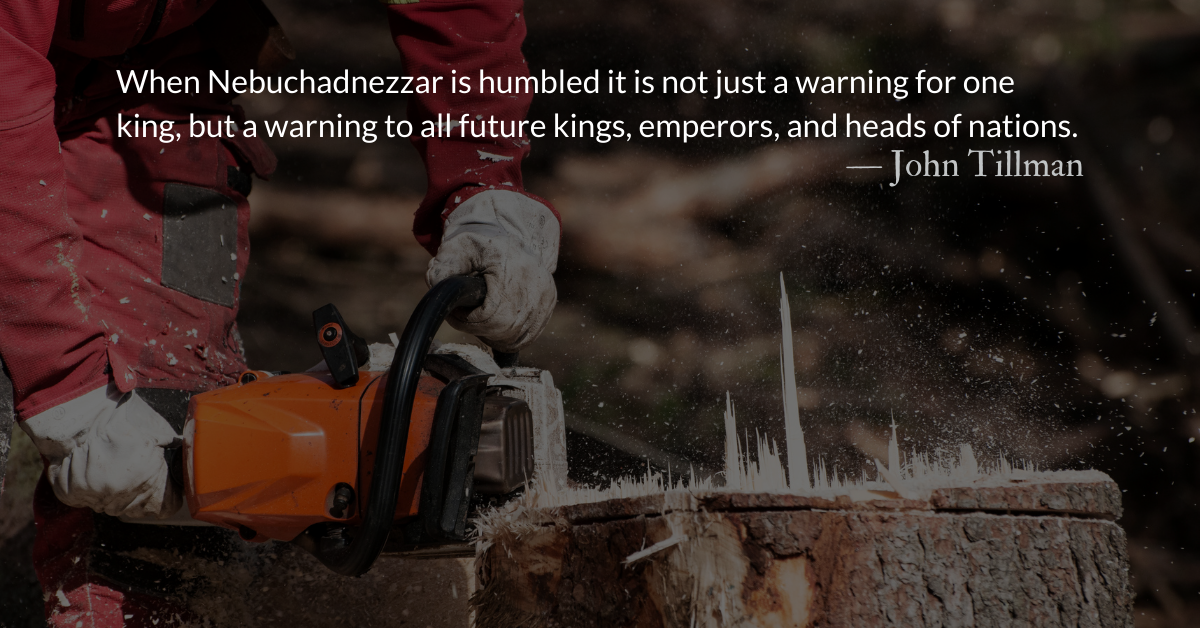 Scripture Focus: Daniel 4.28-32
28 All this happened to King Nebuchadnezzar. 29 Twelve months later, as the king was walking on the roof of the royal palace of Babylon, 30 he said, “Is not this the great Babylon I have built as the royal residence, by my mighty power and for the glory of my majesty?”

31 Even as the words were on his lips, a voice came from heaven, “This is what is decreed for you, King Nebuchadnezzar: Your royal authority has been taken from you. 32 You will be driven away from people and will live with the wild animals; you will eat grass like the ox. Seven times will pass by for you until you acknowledge that the Most High is sovereign over all kingdoms on earth and gives them to anyone he wishes.”

Babylon is more than a historical empire. Babylon is the proto-typical symbol for all empires in rebellion against God.

At the tower of Babel we first see the idea of Babylon. It is like the rebellion of the Garden of Eden written on a nationwide scale. “We will raise ourselves up to Heaven. We will not be scattered or conquered.” (Genesis 11.4) “We will be like God.” (Genesis 3.4-7)

Throughout the cannon, writers reference Babel and Babylon when discussing spiritual or political forces that oppose God. For example, John refers to Rome as Babylon quite clearly, but John is not only writing about Rome in his own time. He uses Babylon as a stand-in so that we will recognize that he is writing about Rome and all future incarnations of power that will take up the mantle of Babylon in opposition to God.

In this same way, Nebuchadnezzar is more than a historical emperor. He is the proto-typical emperor of all kingdoms aligned against the people of God. This is part of the meaning of the dream of the statue which brings Daniel to great prominence. Daniel calls Nebuchadnezzar the “king of kings.” (Daniel 2.37)

Nebuchadnezzar commands that all people worship the God of Shadrach, Meshach, and Abednego and the God of Daniel, but he consistently returns to his prideful, arrogant way of life. This is why he is ultimately humbled.

Scripture and history are unclear on whether or not Nebuchadnezzar truly repented or just gave lip service to God’s greatness until he got the reins of government back in his hands. It is also unclear in our own day if our leaders’ words of faith or repentance can be trusted.

Divine Hours Prayer: The Call to Prayer
Let my mouth be full of your praise and your glory all the day long.
Do not cast me off in my old age, forsake me not when my strength fails. — Psalm 71.8-9

Read more about Stories of Faith :: A Guided Prayer
Nebuchadnezzar’s response is that of an ego-driven, violent, positional leader projecting his own needs onto God. When we place our hope in human government, this is what we can expect.

Read more about The Thriving Tree
Jesus, the king planted by God upon Zion, is the tree that will thrive, bringing all the birds to his shade.