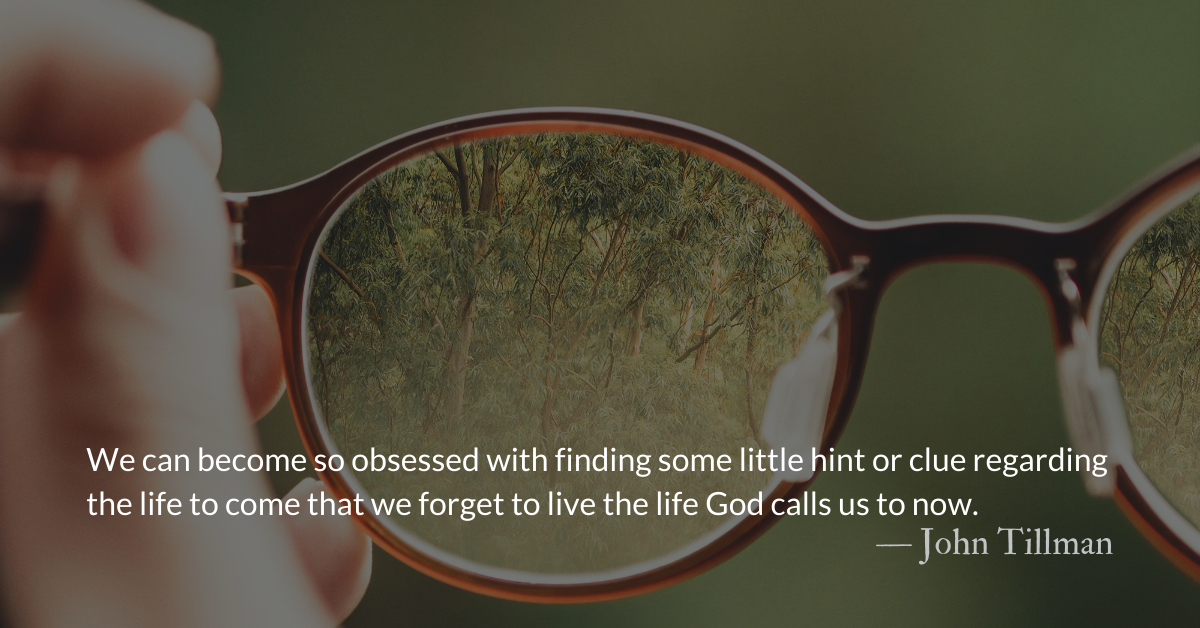 Scripture Focus: Daniel 12.5-6, 8-9, 13
5 Then I, Daniel, looked, and there before me stood two others, one on this bank of the river and one on the opposite bank. 6 One of them said to the man clothed in linen, who was above the waters of the river, “How long will it be before these astonishing things are fulfilled?”
8 I heard, but I did not understand. So I asked, “My lord, what will the outcome of all this be?”
9 He replied, “Go your way, Daniel…13 “As for you, go your way till the end. You will rest, and then at the end of the days you will rise to receive your allotted inheritance.”

1 Peter 1.10-12
10 Concerning this salvation, the prophets, who spoke of the grace that was to come to you, searched intently and with the greatest care, 11 trying to find out the time and circumstances to which the Spirit of Christ in them was pointing when he predicted the sufferings of the Messiah and the glories that would follow. 12 It was revealed to them that they were not serving themselves but you, when they spoke of the things that have now been told you by those who have preached the gospel to you by the Holy Spirit sent from heaven. Even angels long to look into these things.

Most responses to apocalyptic prophecies start with what, when, where, why, or who.

Peter seemed to have this passage in mind when he wrote that even angels long to look into these things. (1 Peter 1.10-12) The “these things” Peter was writing about are prophets, like Daniel, who searched with care regarding times and dates. Yet, Jesus also told the disciples, including Peter, that times and dates were not for them to know, but only the Father. (Acts 1.6-8)

End times prophecies are one of those areas in which well meaning believers can start missing the forest for the trees. We can become so obsessed with finding some little hint or clue regarding the life to come that we forget to live the life God calls us to now.

Identifying a date, a time, a leader, a moment, won’t matter if we are not doing justice, walking humbly, and loving mercy (Micah 6.8). Knowledge can be a clanging gong and a symbol (pun intended) of self-interest rather than care for others. (1 Corinthians 13.1-2)

Asking questions isn’t bad. But eventually Gabriel, instead of answering Daniel’s questions, tells him to move on.

Two other humans in Scripture question Gabriel. In contrast with Daniel, who is strengthened to speak so that he may ask questions, Zechariah is struck mute for expressing doubt through his questions. Mary questions Gabriel, but instead of being struck mute is indwelt by the Holy Spirit to prophesy when she meets Elizabeth.

From Zechariah, we can learn that even without speaking, we can testify to the message of Christ.
From Mary and Daniel, we can learn that revelations and prophecies are sometimes meant to be rolled up and sealed until the proper time—to be pondered and treasured in our hearts rather than shared.

We can follow the instructions Gabriel spoke to Daniel. (Daniel 12.13)
We can go. Move on from doubts and questions to faith and action.
We can rest. We can trust the outcome of life and eternity to Christ.
We can rise. At the proper time, in this life or the next, we will be raised up.

Divine Hours Prayer: The Short Verse
I am the Alpha and the Omega, says the Lord God, who is, who was, and who is to come, the Almighty. — Revelation 1.8

Read more about Breaking the Rhyme Scheme
Christians do not believe in cyclical, neverending, repetition. We know that an end is coming and a new beginning. However, history does rhyme.

Read more about Living Is Harder—Readers’ Choice
Living for Christ in the world often makes a larger difference in the world than dramatic sacrifices.