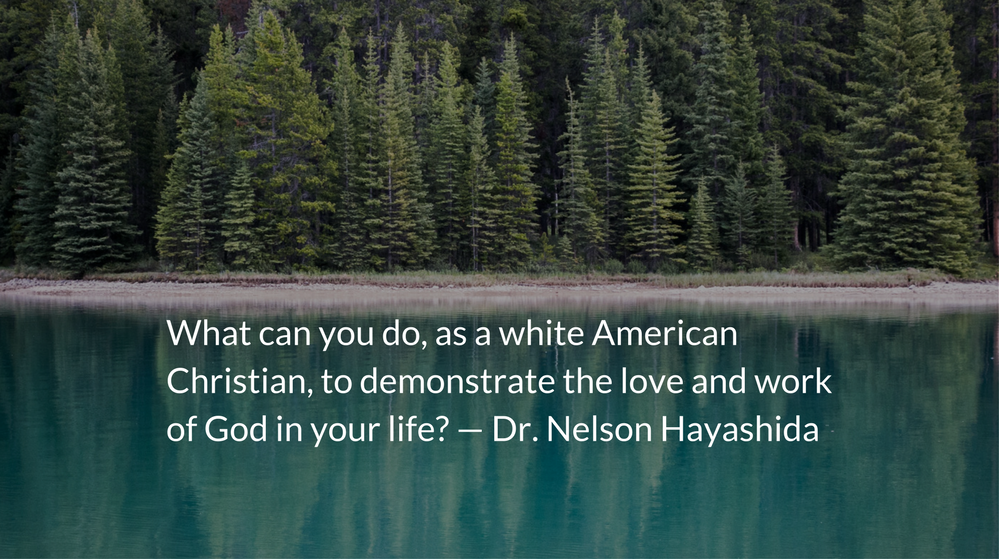 The Responsibility of Racial Reconciliation

Scripture: Galatians 2:11
When Cephas came to Antioch, I opposed him to his face, because he stood condemned.

How can a careful study of Scripture help the Anglo-American find a base of support from which he can launch out to become a courageous instrument of God’s peace? Can a more defined awareness of the worth and dignity of a human being contribute to a healthier racial attitude? What can you do, as a white American Christian, to demonstrate the love and work of God in your life? — Dr. Nelson Hayashida

Reflection: The Responsibility of Racial Reconciliation
By John Tillman

In Stormy Road for This Pilgrim, written in 1978, Dr. Nelson Hayashida includes a chapter titled, “A Challenge to Anglo-American Christians.” His first recommendation for White Christians struggling to understand and deal with the racial tensions of the time was to study the confrontation of the early Apostles with racial groups.

One of the most radical elements of Christianity has always been its assertion of racial equality. But that is not to say that the church has not struggled to assert this truth in our segmented and divided world. The New Testament is full of battles and arguments along racial and cultural lines—each step of the way moving the young faith closer to full acceptance of all races as being united in God’s kingdom.

It is notable that Greek Christians made little headway in being accepted on their own. They relied on their Jewish brothers and sisters in the faith to speak up for them. It was Paul, the “Hebrew of Hebrews” who was the most ardent spokesperson for the Gentile believers who were being marginalized and forced to, in essence, convert twice—once to traditional Judaism, and then, following that, to the Christian “sect” of Judaism.

In today’s racial climate, many seem to put the burden of overcoming societal barriers on the immigrant, the minority. But Dr. Hayashida was prophetically clear in 1978 that the unresolved racial strife of his time would not be solved by actions undertaken by the minorities themselves, Black, Asian, or otherwise.

Anglo-American Christians must be out in the forefront in the drama of this battle. They are the ones entrusted with the major responsibility for enhancing the evolution of a societal atmosphere in which equality, justice, and respect abound for all Americans.

It is the responsibility of the more powerful party to ensure the equitability of any reconciliation. And it is up to White Christians today to not grow complacent or be in denial about the very real struggles that disproportionately affect our racial minority brethren.

Reconciliation requires both parties in any conflict to participate and either party can make the first move. However, if one party refuses to acknowledge the conflict and maintains their innocence, there can be no forward movement.

The Call to Prayer
Love the Lord, all you who worship him; the Lord protects the faithful, but repays to the full those who act haughtily. — Psalm 31:23