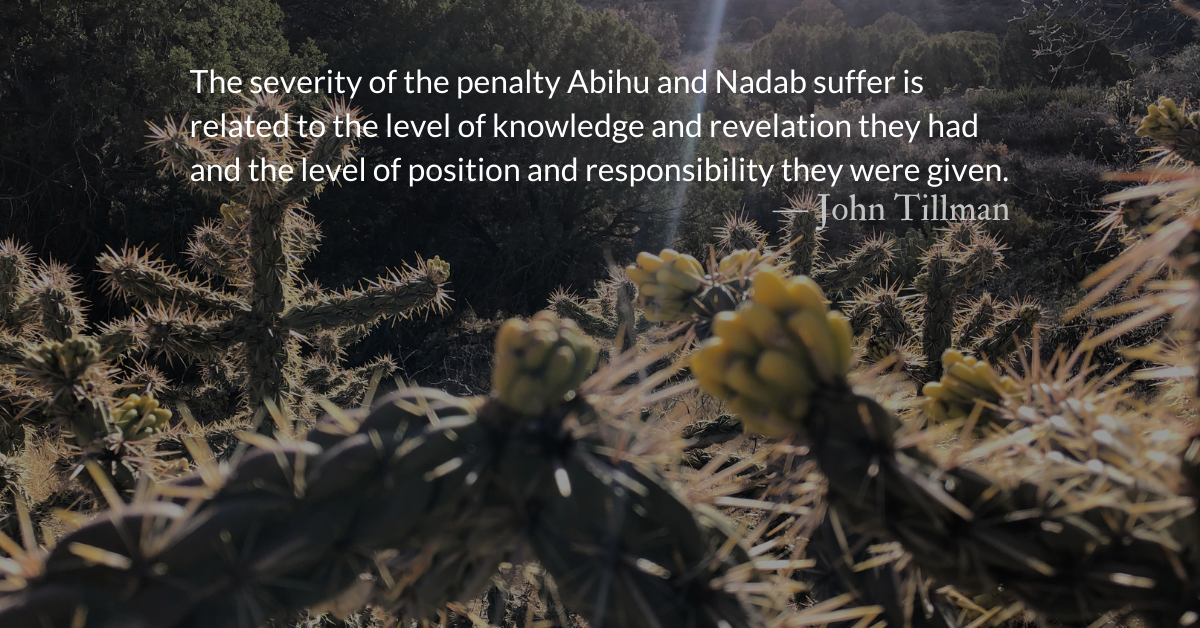 Much Given, Much Expected

Scripture Focus: Leviticus 10.1, 19-20
1 …they offered unauthorized fire before the Lord, contrary to his command. 2 So fire came out from the presence of the Lord and consumed them, and they died before the Lord.

Reflection: Much Given, Much Expected
By John Tillman

The deaths of Nadab and Abihu are twisted by some to condemn actions they want to condemn.

For example, some use it to critique any innovation or change in modern liturgies or worship, some point to 10.9 to try to make this a passage supporting teetotalism, etc. But this passage is not here for us to use to condemn our pet peeves or support our moral preferences.

In scripture, the simplest answer is usually the best, and the simplest explanation of what happened to them is not some secret hinted-at sin, but simply willful disobedience by those who should know better.

They had just been through (and we have just read) an extraordinarily long and complex ritual training which included warnings that this exact thing could happen. (Exodus 19.22)  Nevertheless, they ignored all they had just learned, and did things in an unauthorized way.

All sin falls under the same spiritual punishment, but not all sins bring the same severity of consequences in our earthly lives. Willful, purposeful sin is treated differently in scripture than just “being sinful” or committing “unknowing” sins. Anytime we know what is right and then, knowingly, purposefully do something else, we are exponentially multiplying our commitment to sin and our rebellion against God.

The severity of the penalty Abihu and Nadab suffer is related to the level of knowledge and revelation they had and the level of position and responsibility they were given. Jesus said to the Pharisees, “If you were blind, you would not be guilty of sin; but now that you claim you can see, your guilt remains.” (John 9.41) To whom much is given, much is expected. (Luke 12.47-48)

If Abihu and Nadab were given much, how much more have we been given?
We serve a greater High Priest, who offered greater sacrifice, for a greater temple, so we bear a greater responsibility.

Divine Hours Prayer: The Greeting
Blessed is the Lord! For he has heard the voice of my prayer. — Psalm 28.7

Read more about Much Demanded
God judges those with little lightly and those with much heavily. This should be sobering to us who are greatly privileged.

Read more about Unprecedented
They have taken for granted the immense privilege and wealth they have as people chosen by God.