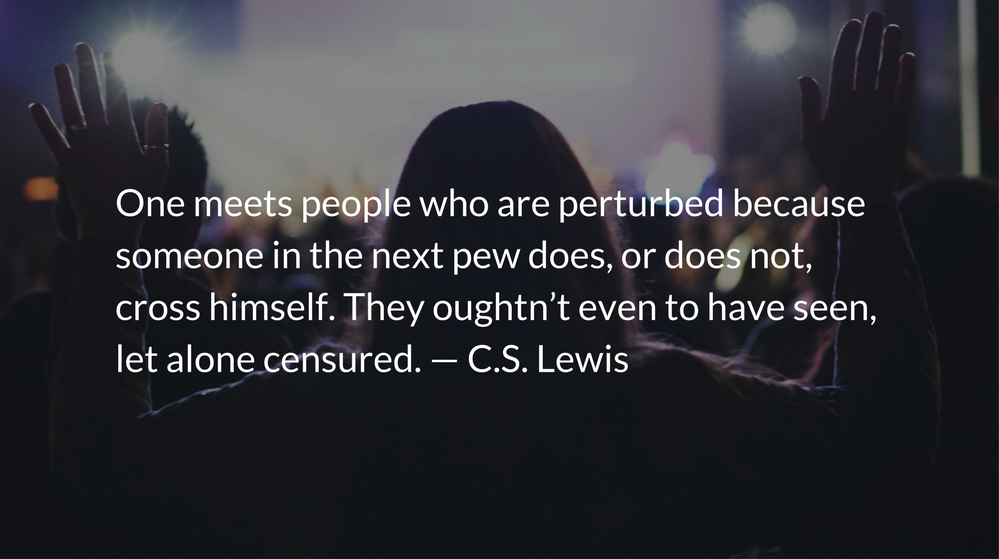 Selected by reader, Lisa, from Gallatin, TN
I have family and friends that habitually critique the worship service immediately upon leaving. And, it’s usually critical and focused on some little obscure aspect of the service that has nothing to do with God. I firmly believe that the greatest surprise for all Christians will be what true worship looks like in heaven. With all the tribes, tongues, peoples, and nations that will be there from the beginning of time to the end… We, in our little bubbles, are clueless.

As stodgy as C.S. Lewis sounds in his letter on Liturgiology (which we read together in two excerpts, here and here) one might mistakenly assume that he is campaigning for unilateral and unchanging homogeneity in worship style and liturgy. However, that is not the case. Lewis seems to appreciate variety, as long as the attention of the worshipers is drawn to God rather than the creativity of the celebrants.

Lewis chides his readers (Malcolm is a fictitious friend, standing in for Lewis’s reading audience) for casting judgment on the worship practices of others, making an appeal to variety within the community of the church.

Broaden your mind, Malcolm, broaden your mind! It takes all sorts to make a world; or a church. This may be even truer of a church. If grace perfects nature it must expand all our natures into the full richness of the diversity which God intended when He made them, and Heaven will display far more variety than Hell. “One fold” doesn’t mean “one pool.” Cultivated roses and daffodils are no more alike than wild roses and daffodils.

In a consumer society and culture, our identity is tied up in our tastes, and our tastes are broadcast through our criticism. The superiority of the role of worship critic is more attractive to us than the supplicative posture of a worshiper.

What pleased me most about a Greek Orthodox mass I once attended was that there seemed to be no prescribed behavior for the congregation. Some stood, some knelt, some sat, some walked; one crawled about the floor like a caterpillar. And the beauty of it was that nobody took the slightest notice of what anyone else was doing. I wish we Anglicans would follow their example. One meets people who are perturbed because someone in the next pew does, or does not, cross himself. They oughtn’t even to have seen, let alone censured. “Who art thou that judgest Another’s servant?”

We must cultivate in worship a certain kind of inattentiveness toward other worshipers and even toward the leaders—maintaining our attention on God as the focus of all our joined efforts.

*Excerpts from Letters to Malcolm: Chiefly on Prayer, C.S. Lewis.

Prayer: The Call to Prayer
For great is the Lord and greatly to be praised; he is more to be feared than all gods. — Psalm 96.4

Additional Reading
Read More about Idolatry of Identity
We desire marketable idols to identify ourselves as theological tastemakers.

Read More about Prayer for the Self-Centered
Feelings are, by nature, self-centered—true prayer is God-seeking and kingdom-focused.

Support our Work
Every week The Park Forum sends over 13,000 email devotionals around the world. Support our readers with a monthly or a one time donation.