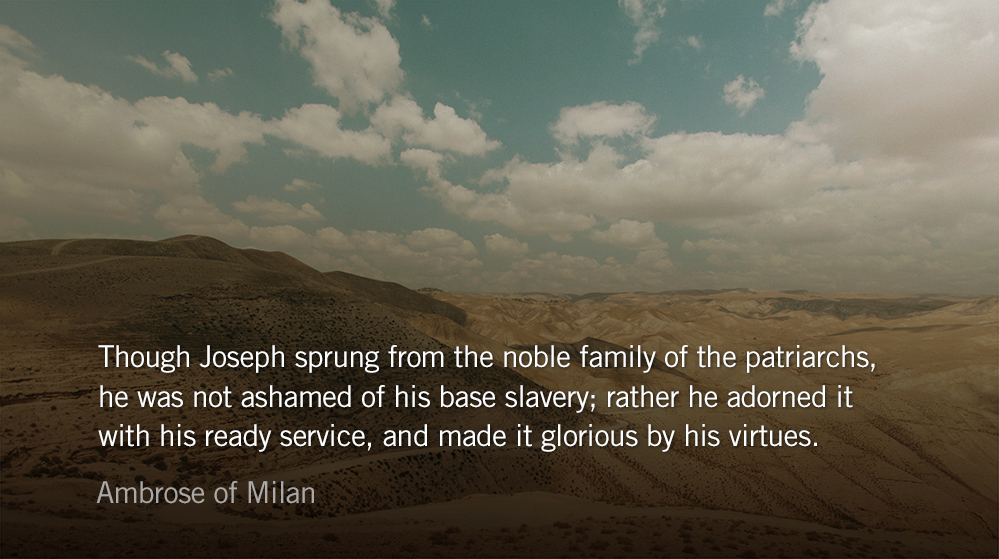 Its a powerful thought that humility will bring out other positive traits. A nice contrast to pride, which has the opposite effect. — Jason

And she told [Potiphar] the same story, saying, “The Hebrew servant, whom you have brought among us, came in to me to laugh at me. But as soon as I lifted up my voice and cried, he left his garment beside me and fled out of the house.”

Every ancient culture had a standard for how to respond to adultery. Few of these standards were humane by any modern definition. The Babylonian Code of Hammurabi, one of the oldest legal writings in human history—and is the source for numerous cultures’ standards afterward—commands:

If a man’s wife should be seized lying with another male, they shall bind them and cast them into the water; if the wife’s master allows his wife to live, then the king shall allow his subject (i.e., the other male) to live.

Centuries after Joseph, Ambrose of Milan would observe:

Though [Joseph] sprung from the noble family of the patriarchs, he was not ashamed of his base slavery; rather he adorned it with his ready service, and made it glorious by his virtues.

He knew how to be humble who had to go through the hands of both buyer and seller, and called them, Lord. Hear him as he humbles himself: “Because of me my master has no concern about anything in the house, and he has put everything that he has in my charge. He is not greater in this house than I am, nor has he kept back anything from me except you, because you are his wife. How then can I do this great wickedness and sin against God?”

Chastity, in other words, was not Joseph’s chief virtue. Somewhere along the way Joseph had learned to see past himself—every decision he made was a derivative of his humility. Something other than personal satisfaction became Joseph’s deepest desire.

The Request for Presence
In you, O Lord, have I taken refuge; let me never be put to shame; deliver me in your righteousness.