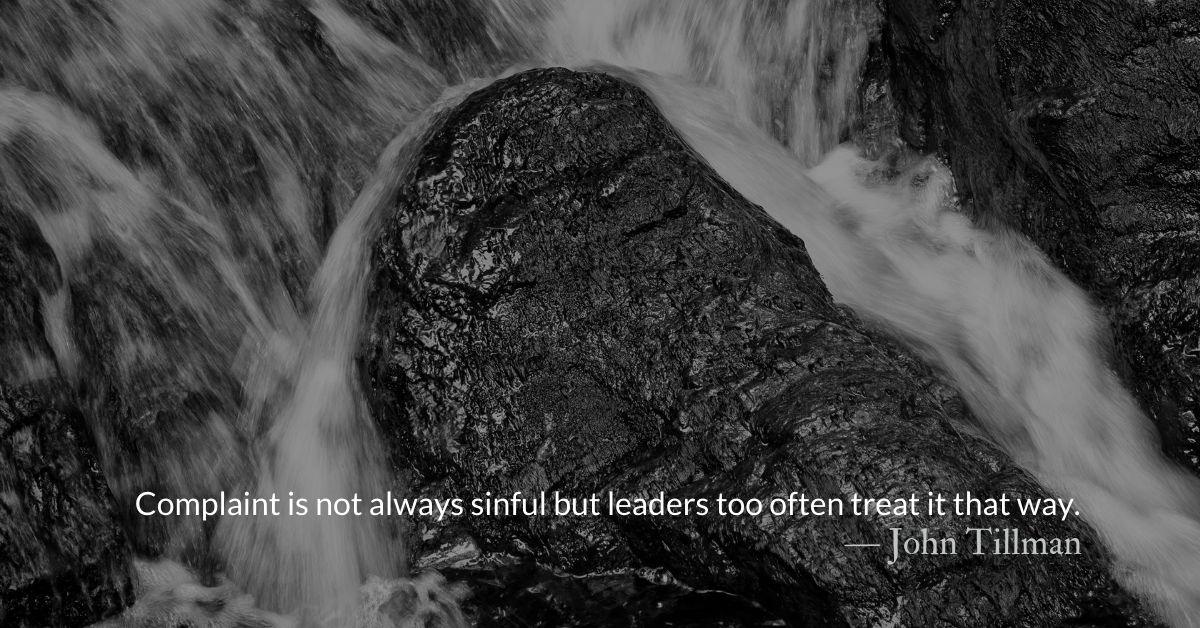 Scripture Focus: Numbers 20.10-13
10 He and Aaron gathered the assembly together in front of the rock and Moses said to them, “Listen, you rebels, must we bring you water out of this rock?” 11 Then Moses raised his arm and struck the rock twice with his staff. Water gushed out, and the community and their livestock drank.
12 But the Lord said to Moses and Aaron, “Because you did not trust in me enough to honor me as holy in the sight of the Israelites, you will not bring this community into the land I give them.”
13 These were the waters of Meribah, where the Israelites quarreled with the Lord and where he was proved holy among them.

Complaint is not always sinful but leaders too often treat it that way.

In today’s passage, we see unhealthy complaining and unhealthy responses by leaders. Only Moses’ response, however, is condemned by God. Also, despite Moses disobeying his instructions, God still miraculously answered the people’s complaint. No one is a hero in this passage except God.

Healthy complaints come from reality falling short of what was promised. Israel’s promise from God, through Moses, was a land flowing with “milk and honey.” Not even having water was a natural point of complaint.

Both times Israel complained about lack of water the confrontation got heated and personal. Both times they went beyond complaining to accuse Moses of plotting to kill them. Moses complained to the Lord in Exodus 17 that the people were ready to stone him. (Exodus 17.1-7) In today’s passage, he called them “rebels.” (Numbers 20.8-12) Moses took these personal attacks to heart, growing angry rather than compassionate toward the people’s legitimate needs.

Moses speaks to the people instead of to the rock. Instead of speaking words of life, bringing life-giving water, he speaks harsh, brash, and prideful words. He defends his honor instead of honoring God. He proclaims his power, his ability, and his “righteousness” instead of demonstrating trust in God.

For followers and leaders, complaining legitimately and responding honorably are difficult. When the reality of our world does not match the promises of God, complaint can be a spiritual practice rather than a sin. When we complain, instead of calling into question God’s holiness, we can point to God’s holiness as a reason for him to act.

Read more about Complaining in Prayer
Have you ever wondered if it was appropriate to express your thoughts, feelings, and darkest emotions to God?

Read more about Complaint to Commission
Complaining can turn into unspiritual grumbling but it can also initiate lament in our lives and communities.