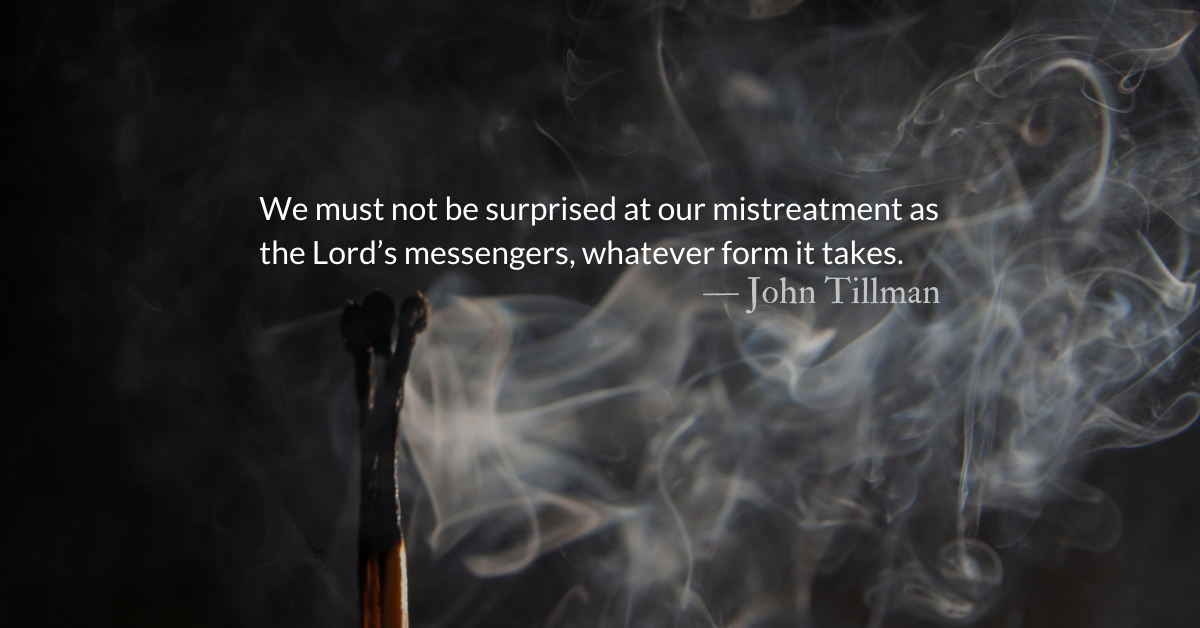 Scripture Focus: Malachi 3.1-5
1 I will send my messenger, who will prepare the way before me. Then suddenly the Lord you are seeking will come to his temple; the messenger of the covenant, whom you desire, will come,” says the Lord Almighty.
2 But who can endure the day of his coming? Who can stand when he appears? For he will be like a refiner’s fire or a launderer’s soap. 3 He will sit as a refiner and purifier of silver; he will purify the Levites and refine them like gold and silver. Then the Lord will have men who will bring offerings in righteousness, 4 and the offerings of Judah and Jerusalem will be acceptable to the Lord, as in days gone by, as in former years.
5 “So I will come to put you on trial. I will be quick to testify against sorcerers, adulterers and perjurers, against those who defraud laborers of their wages, who oppress the widows and the fatherless, and deprive the foreigners among you of justice, but do not fear me,” says the Lord Almighty.

John 20.17-20
17 Jesus said, “Do not hold on to me, for I have not yet ascended to the Father. Go instead to my brothers and tell them, ‘I am ascending to my Father and your Father, to my God and your God.’ ” 18 Mary Magdalene went to the disciples with the news: “I have seen the Lord!” And she told them that he had said these things to her.
19 On the evening of that first day of the week, when the disciples were together, with the doors locked for fear of the Jewish leaders, Jesus came and stood among them and said, “Peace be with you!” 20 After he said this, he showed them his hands and side. The disciples were overjoyed when they saw the Lord.

“Don’t shoot the messenger” is a cliche based on the fact that messengers may be treated badly for faithfully stating the truth.

This is perhaps especially true of the Lord’s messengers. They are criticized and laughed at. Words like “crazy,” “out there,” “heretics,” “unrealistic,” and “mad,” are tossed around.

Malachi’s prophecy is often tied to John the Baptist. Jesus said that John was mocked for elements of his Nazarite vows. John was discounted as crazy by the religious establishment and was murdered by the government for his sexual ethic. (Matthew 11.18-19; Luke 7.33-34)

Mary’s testimony, and that of the other women, is not believed and is referred to in a dismissive fashion, implying their report is considered unreliable. (Luke 24.22-24) In addition, Mary was falsely slandered centuries later by church leaders’ poor teaching. Three biblical women (none of whom are called a prostitute in scripture) were amalgamated into one false picture of Mary Magdalene as a prostitute. (Who is Mary Magdalene?, by Mary Ann Beavis)

John was dismissed as a madman and beheaded for his moral stance. Mary was slandered as a prostitute. Even the Magi, to whom Christ is revealed on Epiphany, were under threat by the angry king Herod, who, unable to reach them and desperate to kill Christ, slaughtered innocent children.

We must not be surprised at our mistreatment as the Lord’s messengers, whatever form it takes.

When Christ appeared to his disciples, he brought peace for us to share with the world. The next time he comes will be different. John the Baptist says Christ will wield an axe. Malachi promises fire and harsh, burning, launderer’s soap that will wash away the filth Malachi described in the previous chapter.

May our offerings be brought in righteousness. May we testify of the gospel to sorcerers, adulterers, and perjurers. May we stand against those who defraud laborers of their wages, who oppress the widows and the fatherless, and who deprive foreigners of justice.

By these things, we are the Lord’s messengers, preparing the way, carrying the gospel to all around us. We must be willing to bear any reproaches that come because of it. It is not we who are being attacked but the precious cargo we carry and the precious lives of those who are yet to be saved.

Bearing the gospel will also mean bearing reproach.
May we be faithful in both.

Read more about End of Year Giving and Supporting our work
Don’t miss your chance in 2020 to support our 2021 content with a one-time or recurring gift.

Read more about Truth Unwanted :: A Guided Prayer
As the world investigates Jesus in our lives, we can expect the same treatment that Jesus received.